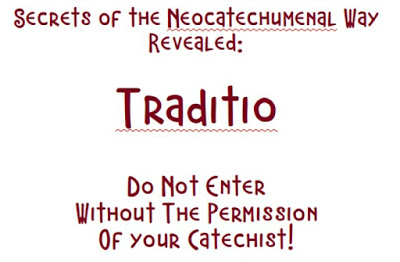 Let’s continue reading together the 1982 edition of the volume “Traditio Symboli”, because it is an authentic source from which we can continuously extract useful raw material that will make it clear the origin of many distortions of thought and acts of the Neocatechumenals, ways that are completely unintelligible to someone outside the Way, but suddenly clear when reading these pages.

The text (on page 118 of the volume) may be disturbing, so we suggest reading it with the rosary clutched in your hands…

“So what do I mean? That you, brothers, if you have met this prophet and have the resurrection inside you, and you have life, this resurrection is shown in the family, so that we can have children, we can love our husband, we can bear the unbearable wife, because we can accept I do not know what.

And above all, we do not use religion perversely, perversely. The Christian understands perfectly and does not use religion so that God takes away the cross, as do the people with Christ. “Cure my son, who is epileptic,” and Jesus Christ says, “O perverse and adulterous generation, how long will I have to bear you?”  How?  God gave you an epileptic son and you call me because God my Father has done very evil things, I who am the Son of God do good things to you, no?  But why don’t you ask why you have a sick child?  But do not you realize that?

Why must God have pass to your head?  Why don’t you think that God has an immense design for you and that what’s happening to you…do not rebel against them. No, nothing! I do not want to know anything. The only thing they want…that matters is the signs, that is important is that Christ is the Messiah? The only thing that matters to that man is that his son is healed that’s it.

There is nothing like this in the Gospel: the contempt of the father by Christ is completely invented, as in the reaction of the man born blind (John 9).  That’s what Kiko thinks has happened but it has no relevance to reality in any of the Gospels, so it never happened.

“But look,” Jesus Christ says, “look idiot[literally: “cretin”].  look at that other family you have close to you. The neighbor has no epileptic son, and is he happy? Is happy? She is not happy at all! He has other problems.”  And that: “And to me that I care about others.  I only have this problem: I can not bear to see my son that when he comes the disease is thrown into the fire.

Yes, I understand, I am an egoist. Do it for me, do it for me! I do not want to know anything anymore. “O perverse and adulterous generation!  And in fact he will do very few miracles, he did not come here to perform cures.  Healings do not serve anything. But there are people so perverse who think that the only thing that is valid in the world is to do these cures, the only valid thing.

This is what we really say: the world wants to take away all that it does not want, and that day man becomes proud, powerful, and there is no escape for the weak, the weak are marginalized for the pride of society , Where those who make a slight mistake have all the weight of the law on themselves, so that they can not move. That is why we say no, brothers.

But where are we going?  But what beastliness is this?  But what a monstrosity!  But why did this happen to me? But how is it possible: all my life working for a piece of land and now I find myself with my dead wife and all my children! But my God, but what happened here? ‘ The whole society is upset, and forced to rethink. Maybe it does not serve nothing, nothing, but God intended it.”

The Gospel passage literally raped by this serial killer of the Sacred Scriptures is Matthew 17:14-21, the healing of the possessed epileptic:

14 And when they came to the crowd, a man came up to him and kneeling before him said, 15 “Lord, have mercy on my son, for he is an epileptic and he suffers terribly; for often he falls into the fire, and often into the water. 16 And I brought him to your disciples, and they could not heal him.” 17 And Jesus answered, “O unbelieving and perverse generation, how long am I to be with you? How long am I to bear with you? Bring him here to me.” 18 And Jesus rebuked him, and the demon came out of him, and the boy was cured instantly. 19 Then the disciples came to Jesus privately and said, “Why could we not cast it out?” 20 He said to them, “Because of your little faith. For truly, I say to you, if you have faith as a grain of mustard seed, you will say to this mountain, ‘Move from hence to yonder place,’ and it will move;  and nothing will be impossible to you.”

Kiko totally upends the meaning and puts into Christ’s mouth words that He never said: “Look idiot,” he tells him, so blaspheming the thrice holy name of Our Lord. The false Jesus of Kiko, instead of exercising mercy and compassion, would call this father an “idiot”, suggesting that his son is that way according to  “God’s plan”, so that father would be a perverse person to ask God to change his will.

Indeed Kiko, with extreme malice, intentionally switches the terms used by Christ in the same Gospel of Matthew in two totally different episodes.  Jesus in healing the epileptic says “unbelieving and perverse generation“, but Kiko changes “unbelieving” to  “adulterous” which is the expression used by Christ in Matthew 16:4 in answer to the Pharisees and Sadducees when they demanded a sign to prove that He was indeed the Messiah:

1 And the Pharisees and Sadducees came, and to test him they asked him to show them a sign from heaven. 2 He answered them, “When it is evening, you say, ‘It will be fair weather; for the sky is red.’ 3 And in the morning, ‘It will be stormy today, for the sky is red and threatening.’ You know how to interpret the appearance of the sky, but you cannot interpret the signs of the times. 4 An evil and adulterous generation seeks for a sign, but no sign shall be given to it except the sign of Jonah.” So he left them and departed.

Kiko deliberately confuses the two moments, thus approaching the pleading of the father as a request for a sign. And indeed, in the unbalanced theology of the Way, it is just like this: if you ask Jesus for healing, or help in a difficult situation, you are challenging God to give you a sign, like the Pharisees, so you are malicious and perverse.  The Christian, according to Kiko, is “sitting” passively “in the dust, lonely and silent” because he believes in a monstrous “god”, which forces his children to endure misfortune and suffering.

Kiko has absolutely no idea what the evil is, where it originates, and the sense of physical evil and moral evil.  In his doctrine (adulterous and perverted) all evil is sent by God because it is permitted by Him.

Indeed, we should be blessed because children are born with deformities or disease, because people die of cancer, because there are misfortunes in our lives, because we may stay homeless and without children because of an earthquake …

He says, “Woe to us,” when there is no more evil, that is, that evil is just necessary for our salvation, that without evil we will become “arrogant”.  Here he explains the necessity of sin, to sin in order to understand who you are. But this is a Lutheran mush!

Kiko – the only real pervert here – he is not even ashamed to spit in the face of all the sufferers of the world, suffering from evil, telling them that if they suffer it is because God wants it…Is this the “kerygma” that brings Kiko’s Resurrected ones to the homes?

The Gospel of the epileptic has another meaning altogether.  Jesus’s words are not addressed to the boy’s father, but rather to all those present, especially to the disciples who had not healed the boy.  His words referred to the lack of faith that prevented the healing, and were certainly not addressing the supplication of a father who only wants to see his possessed and ill son healed!

According to Kiko if a child is dying of cancer, we should absolutely not pray God to heal her!  We would be perverted!

If the house collapses on our head and we lose our whole family, we should not cry over their bodies, no!  We should dance, dance and sing of joy!

If the responsible of the community touches, molests and assaults our eleven-year-old daughter, destroying her life and psyche, we must thank the pedophile because “there is a holy design of God for her!”  Oh joy! Oh joy!

If we do not of course, we are the “arrogant” ones, the reprobates, the rebels to be condemned.  God, according to Kiko, would therefore be the origin of evil, Since He would think it, he would design it specifically for us, or let evil happen because it has to “teach” us something because it is His will that evil happens. If so, then God would be the creator of evil, of all evils, including those coming from man, because God himself, by virtue of His holy design, would conceive of them.

We are sorry for those who walk in the Way, for it was not the Holy Spirit who inspired Kiko with the words on this scandalous page, but clearly the devil, Satan. We can not accept that the name of God is juxtaposed to this diabolical vomit, peddled as “catechesis.”

We invite you to strongly reject this distorted, demonic, heretical teaching before you poison your whole soul.

P.S. If anyone has any doubts about the authenticity of the text, here is the photo of the page: 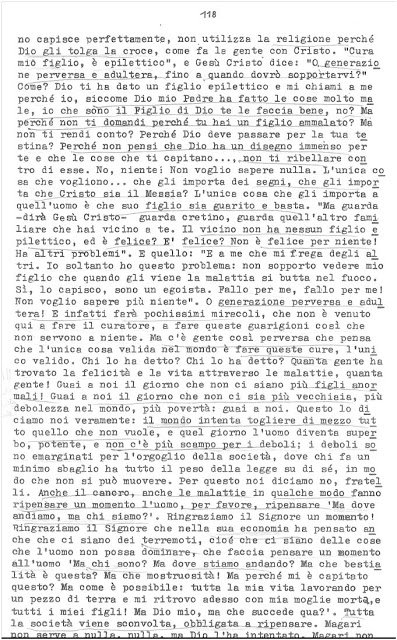 P.P.S. Of course in the volume corrected in 2001, the God who sends you misfortunes to convert you and the praise of abnormal children suddenly disappeared, and were more or less synthesized in this sentence: “How many people have found conversion and life through disease!”  and even that verse was adjusted with No. 549 of the Catechism.