Was Jesus a Mudslinger?

By Lino Lista from Italy and Chuck White from Guam.

A treasure trove of Kiko’s secret catechisms has recently been found in Italy.  This is quite a blessing because these secret documents give us more proof of the twisted interpretations of Scripture that form the foundation of the Neocatechumenal Way.  Here is an important example.

We have already devoted much attention to the catechesis of Kiko on the healing of the man born blind in the ninth chapter of the Gospel of John. We did so not only because Kiko twisted the words of John 9  and misrepresented the meaning of the mud/clay in that narrative,  which he [button-brown url=”/?page_id=42944″ target=”_blank” position=”right”]Read Kiko’s Mud, Part I[/button-brown]regards as a symbol of the sins of the blind man and not as a matter of Christ’s re-creative anointing, but also because we understood that this is not just Kiko’s simple catechesis of the Way, but rather is a figure of the Way itself.  This can already be deduced from a few related sentences from Kiko’s writing on the initial conversion phase of the Way:

“This poor blind man would say: “Of course I’m going to wash. Don’t you see that you’ve covered me with mud?” Then the Scriptures say that the blind man went to wash and, once washed, his eyes opened, he started to see and to shout that he could see….  What is the catechumenate? A time in which mud will be put in your eyes. It is Jesus Christ who does this. Because you do not know that you are blind.  You don’t know that you are dirty and therefore you don’t want to wash.” P. 14-15, Guide for Teams of Catechists, Vol. I

The “discovery” in Italy of old copies of the Catechism of Kiko following the Second Scrutiny, up to the stage of Election, confirms this belief.  That is, in the stage of the Traditio in the catechumenate of Kiko, this catechesis “of the mud” is revived and expanded in an intolerable way.  The foundation of the Traditio stage is precisely the catechesis of the man born blind, which is given on the first night after the Light Ceremony in the Convivence that “opens this time.” The story of the man born blind will be the basis of individual scrutiny of the Neocatechumenal Way, a scrutiny that is used to assess whether members are fit to go and evangelize in the houses, two by two.

The following passages were taken from an early version of Kiko’s catechism, which is almost a Q source of the “Gospel according to Kiko”.  From it, one can draw the author’s original thought before any editorial interventions and corrections were made to the catechetical directory of the Neocatechumenal Way (NCW). In a movement like the NCW, where the oral tradition of the old catechists has been handed down from master to disciple, you can rest assured that the original thinking of the founders permeates the practice of the Way, as it does in the liturgy of the Way.

“Christ makes a clay with the saliva; and when he made a mud with his hands … boom!, He goes and puts it over his eyes. This poor blind man who is there … First, imagine that the blind man did not hear the conversation “why is he blind, not because he is blind,” he’s begging and suddenly a thug comes – thinks this blind man – and he puts mud on his eyes, poor fellow. He would start to scream: “Filth! Go do this to your mother!”, He would take the cane “But what do you do?”: A poor blind man, but how cruel is this Jesus Christ who takes on the mud and puts it over his eyes, sick people horrible thing, eh? That’s it.” P. 12, Guide for Teams of Catechists, Vol. 6

On the pool and what the catechist say to “the ones sent”:

“But Jesus said these words:” Go wash, go ‘wash in the Pool of Siloam ”    […] The word Siloam means ‘sent’. Why does he say the word ‘sent’? Because this is the sending catechesis, you will be sent by the bishop to preach to the houses!  […]. However see that this blind man did not ask anything, he knows nothing; he is blind and that’s it! How many people in the houses did not ask for your presence. They do not want you. But they’re blind! You know it: tortured, covetous, his hands still outstretched asking for money […].  Everyone locked in the house for fear of thieves […].  We say in the first catechesis: this Word is a picture of the Neocatechumenal Way […].  And what did the Way do with you? It took this mud, which are your sins, and it has put them in your face.” P. 13, Guide for Teams of Catechists, Vol. 6

Kiko:  The Lord put mud on your eyes? 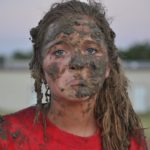 Kiko:  What was this mud?

X:  My sin, seeing how I was, and I did not give any excuse, but was told by others; Also through the Way, with facts, not once but many times, sometimes more clearly, sometimes not. P. 178, Vol. 6

What should we say? This is not simply a broken exegesis, but rather it is a misappropriation, with unprecedented deception, of one of the most tender, lovable and charming miracles of the Gospel in order to promote the Way and its Gnostic doctrine of sin. The statement “but how cruel is this Jesus Christ” is certainly a Freudian slip, an unconscious revelation of the nature of the sludge/mud in the Neocatechumenal Scrutinies, when the muddy “enlightened” besmirch the neophytes one at a time,  having been all trained to lay bare their own consciences.  And they consider this to be a “charism”, an “anointing”, and a “grace”!