“Therefore I tell you not to be afraid before this scrutiny, because we are sent here by Jesus Christ to help free you from your demons.” Kiko Arguello[1]

When we left off at the end of my last post, Part 2,  the members had finished sharing their written questionnaires in small groups and the individual scrutinies were about to begin.  Let’s start from there:

The lead catechist randomly draws a name of a member from a bag to determine who will be scrutinized.  The chosen member is asked to sit in a chair, called the “Chair of Mercy”, which is often placed in the middle of a circle of chairs near a cross.

The lead catechist will take notes, assuring the group that he will destroy the notes at the end of the scrutinies.  There is some doubt, though, that these notes are in fact destroyed.  Many members subject themselves to the second scrutiny several times, and the catechists seem to have the uncanny ability to remember vivid personal details from previous scrutinies…

The member being scrutinized will read out the answers on his questionnaire and the catechists will then start asking questions to clarify the answers.  Sometimes the member will be told to go back and rewrite his answers with more detail and his name will be drawn randomly at a later time to continue his scrutiny.

Here are some actual questions reported by ex-members:

It must be terrible in some instances for a person to hear some of these secret sins of their spouse for the first time with a dozen or more of their “brothers” listening to every word.

Catechists will often interject comments like, “You are a murderer!  You hurt people!” or, “You are arrogant and full of pride.” after answers are given.

Perhaps the questions about sex are the most titillating, but Kiko Arguello makes it clear that something else is more important:  money.  In Kiko’s mind, money is the real problem, and the job of his catechists is to chase that “demon” out of the pockets of the members.  He tells this story when discussing the individual scrutiny in his Catechetical Directory:

For example, for a man last year we thought that all his problem was sexuality because he always had messes of that type; unlike this year, the Lord has shown us that no, that his problem was money. Last year he was not happy with everything we told him, no, he was not happy. Instead this year the Lord gave us the key to help him and it changed his face and now is a free man.  And we told him: ‘Leave your accounts alone, you go home and sell ​​everything you have. You have many millions? Well, go home and give everything the poor’ Today he is absolutely transformed. All his problems were there [with the money].  He had a problem needing to feel powerful, to be powerful, to be more.  He had a complex and and it was all based on money. And last year we had not seen [the problem] and said, “Leave that woman” and nothing had happened.  He had not been freed and and had not solved anything…However, this is what is important, in this scrutiny you have to choose between God and Mammon. Mammon is a symbol of power. Sell your possessions, give your money, it is a sign to make you humble.

At the conclusion of his individual scrutiny, the member being scrutinized is asked to think secretly of some concrete sign that they could offer to show that they reject all of the idols in their life.  The lead catechist tells the member:

“The Lord wants make an alliance (covenant) with you, so he says: Hate your father, your mother, your wife, your husband, your children, your brothers and sisters, and your life itself.  Take up your cross and sell all your property.  Then come and follow Me.  Think of a sign in money that expresses your willingness to do this.  During these days, please fast and ask the Lord for help.”

This financial “sign”, which will be quite substantial, will be brought forth and offered by the member at the Rite of Renunciation of Idols, which we’ll discuss in my next post… 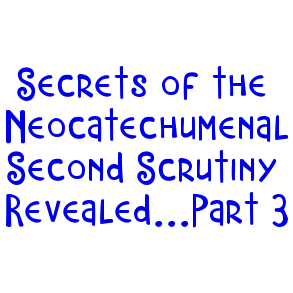