If you ever find yourself attending the 12th night of the initial catechesis of the Neocatechumenal Way, you’ll hear the catechists say some remarkable things about Abraham, our father in faith. The insidious pressure to consider yourself to be a “failure” and an “idolater” begins on that night.

Here are some samples of Kiko Arguello’s twisted teaching for that session, taken from the first volume of his secret catechetical directory:

“Abraham, we were saying, is a failure. Abraham is perhaps the most existential character in the Bible. This is so true that Kierkegaard, who is an existentialist, wrote a book about Abraham.”  p. 233

Kiko is referring to the Protestant philosopher Søren Kierkegaard (1813–1855), a founder of the existentialist movement, who wrote “Fear and Trembling”,  a book which contains four retellings of the story of Abraham.  Kiko turns to Kierkegaard for his inspiration in this case, and not to the Scriptures.

“Abraham is …a polytheist. Like all people of his time he believes in many gods. But there’s something different about this man: he is a failure, because he is already old and has neither children nor a land where he can be buried.” p. 228

“This is a bit like the figure of Abraham: an old man who feels he is a failure, almost at the point of suicide. He is at the point where he almost does not want to work anymore because he finds his life without meaning.”  p. 235

“…If today, tonight, here, there is someone who finds himself like Abraham, whose life is a failure and without meaning, who is tired and unhappy…”  p. 235

“Later on, he idolizes this son so much that God asks Abraham to sacrifice him. God wants to help him because he has put himself in a very dangerous situation.” p. 231

“Because Abraham, whom God loves, had put himself in such a position that he was beginning to doubt, and he had the capability of not doing the will of God, because of the exclusive love he has for this son.” p. 240 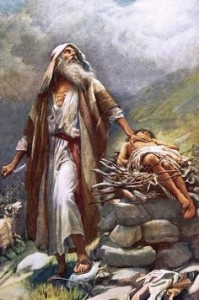 In short, if you attend the 12th session of the initial Neocatechumenal catecheses, you will be taught that Abraham was a miserable failure, almost suicidal, and that he idolized his son Isaac. You will be asked, “What is the Isaac (idol) in your life?“.

And that’s the main point.  If you continue walking in the Way, you will be constantly reminded that you are a failure, (or here) and you will be pressured to consider your family to be  your “idols”.

But what do the Sacred Scriptures actually say?  Was Abraham a failure?  Was he suicidal?  Was he a polytheist?  Did he idolize Isaac?

And Joshua said to all the people, “Thus says the Lord, the God of Israel, ‘Your fathers lived of old beyond the Euphra′tes, Terah, the father of Abraham and of Nahor; and they served other gods. [Joshua 24:2]

In fact, in one of the most famous traditional Jewish rabbinical commentaries on Genesis, we find a story of Abraham opposing his father’s idolatry by demonstrating the futility of praying to them:

“Terah was a worshiper of idols. One time he had to travel to a place, and he left Abraham in charge of his store. When a man would come in to buy [idols], Abraham would ask: How old are you? They would reply: fifty or sixty. Abraham would then respond: Woe to him who is sixty years old and worships something made today – the customer would be embarrassed, and would leave. A woman entered carrying a dish full of flour. She said to him: this is for you, offer it before them. Abraham took a club in his hands and broke all of the idols, and placed the club in the hands of the biggest idol. When his father returned, he asked: who did all of this? Abraham replied: I can’t hide it from you – a woman came carrying a dish of flour and told me to offer it before them. I did, and one of them said ‘I will eat it first,’ and another said ‘I will eat it first.’ The biggest one rose, took a club, and smashed the rest of them. Terah said: what, do you think you can trick me? They don’t have cognition! Abraham said: Do your ears hear what your mouth is saying? Terah took Abraham and passed him off to [King] Nimrod. ”  Midrash B’reshith Rabba 38, 13, 6th century C.E.

Kiko also teaches that Abraham idolized his son Isaac.  The testing of Abraham (Gen. 22:1-19), when God asked him to sacrifice his son Isaac, proves just the opposite!  Abraham did not hesitate in the least to obey God.  He set out early the next morning to obey God’s instruction:

“So Abraham rose early in the morning, saddled his ass, and took two of his young men with him, and his son Isaac; and he cut the wood for the burnt offering, and arose and went to the place of which God had told him.” Genesis 22:3

Furthermore, we read in the Book of Sirach:

Abraham was the great father of a multitude of nations,  and no one has been found like him in glory;  he kept the law of the Most High,  and was taken into covenant with him;  he established the covenant in his flesh,  and when he was tested he was found faithful.” Sirach 44:19-20

The Sacred Scriptures give us a glimpse of the character of Abraham.

Abraham was confident, especially in his friendship with God.    When God told him that He was going to destroy Sodom and Gomorrah (Gen. 18:1-33), Abraham confidently bargained with God in order to save the lives of his nephew Lot and his family who lived in Sodom.

Abraham was brave. When Lot and his family were captured by Chedorlaomer, King of Elam, Abraham raised an army of 318 servants and in a daring nighttime raid against a far larger army, rescued them and their possessions (Gen. 14:11-16).

Abraham was conniving , especially when it came to his wealth and self-preservation. He told Pharaoh that his wife Sarah was his sister in order to escape death and to acquire a dowry when the Pharaoh took her as his own wife (Gen. 12:10-20). This was technically not a lie, since Sarah was his half-sister (Gen. 20:12). He said the same thing to King Abimelech of Gerar, with the same result (Gen. 20).

Abraham (known as “Abram” in earlier days) did not fail in the work of his hands, and in fact, he prospered:

He was married to a very beautiful woman, Sarah (Sarai):

“When he was about to enter Egypt, he said to Sar′ai his wife, ‘I know that you are a woman beautiful to behold'” Genesis 12:11

He was blessed in all things:

“Now Abraham was old, well advanced in years; and the Lord had blessed Abraham in all things.” Genesis 24:1

Abraham was a friend of God.

So you see, Kiko Arguello and his catechists are very wrong about Abraham.  They twist the Sacred Scriptures.  Beware.  The insidious pressure to consider yourself to be a failure and to consider your family to be your idols begins on the 12th night of the initial catechesis.

One thought on “Kiko’s Abraham: A Failure and Idolater”