But there is one thing that I was telling you before: that now, in the Neocatechumenal Way, you have to give the first fruits and the tenth [tithe]. This fact is already present in the commandments of the Church. Kiko Arguello, Catechetical Directory, Vol. 4

In Part 5 of this series, I mentioned that the second scrutiny initiates a substantial revenue stream for the Way, and anything that might dissuade others from joining the sect, such as coerced donations and psychological abuse, must be kept strictly secret.

A day or so after the Rite of Salt and entrance into the Catechumenate, and after the catechists and responsibles have secured the sizeable donations from the Second Scrutiny, the catechists conduct a special “Catechesis on the Way“, where they obligate members to give a tenth of their income (i.e. tithe) to the community every month.

In religion it says that God has revealed that you will give to the priests the first fruits of your oil, your corn, of thy sheep, your lambs; and also will give a part of your assets…This fact of tithing is then passed to the Church: it is a commandment the Holy Mother Church.  “Paying tithes and first fruits to the Church of God”;  it’s a commandment of the Church that is studied in the catechism. Although later no one ever paid any tithes, or first fruits – none whatsoever.  In the Didache, which is the first catechesis,  it says, “it is written that the first fruits and the tenth part of your goods you will give to the prophets. If you have not prophets in your community to give, says the Didache, the poor who are Christ.”

Kiko is lying, of course.  While some Catholics do tithe, the Church does not command the faithful to tithe, but only to “assist with the needs of the Church so that the Church has what is necessary for divine worship, the apostolic works, and works of charity and for the decent sustenance of ministers.   They are also obliged to promote social justice and, mindful of the precept of the Lord, to assist the poor from their own resources.” [Code of Canon Law, Canon 222]

Kiko says that tithe money goes to the “prophets”.  Who are they?  Kiko tells us a bit later in the Catechesis on the Way:

In order to arrive at this community you have to be taught, you’ll have to get another education. Of what you earn monthly, the tenth part is for the Church and for the poor, to help travelers, for help your catechists … I want to tell you to think of the catechists. Because if we do not prepare the community to aid the catechists a little, then of course, there will come a time when … It must be a normal thing, that is born from yourself…We hope that this Scrutiny has implemented something in you so that you create, among of you, this community of goods.

So, according to Kiko, the “prophets” are the catechists!  And the funds collected are especially for their travels!

Article 6, §3 of the Statutes of the Neocatechumenal Way states:

The Neocatechumenal Way will seek to foster in its recipients a mature sense of belonging to the parish and to promote relations of profound communion and collaboration with all the faithful and with the other elements of the parish community.

Oh, I can hear the objections now:  “But we don’t keep track of what each member gives – that would be pharisaical!”  Baloney.  The Way is all about judging, and if the catechists perceive that a member is not giving what he can, he will not be judged worthy of progressing to the next stage of the Way. 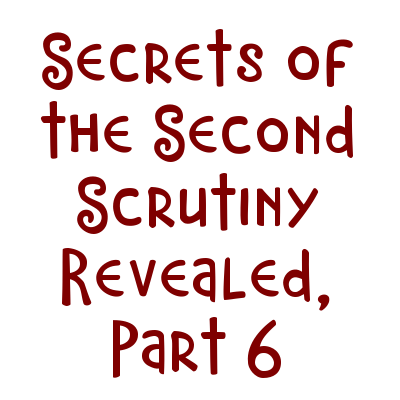