“Now we will read the records of the spoil that we have ripped from the idols in the victory over the demons. When Israel ends a battle, she picks up the loot, right?” So are we. That booty is for the poor, and is the money that the selfishness had taken from the poor.”  Kiko Arguello, Catechetical Directory, Vol. IV

Savings accounts, retirement accounts, jewelry, heirlooms, titles to automobiles and land.  All laid at the feet of the catechists…

When we left off in Part 3, each community member had concluded their tearful individual scrutiny where they publicly confessed their sins in front of their community under the blistering inquisition of their catechists.  Now we’ll move into the Rite of Renunciation of Idols, where members put a significant amount of their wealth – or their family’s wealth – at the feet of their catechists.

If you remember, after each individual scrutiny, the catechist told each member,

“…Think of a sign in money that expresses your willingness to do this [renounce idols].  During these days, please fast and ask the Lord for help.”

Our story picks up several weeks later and the scrutinized members are now gathered for the “Rite of Renunciation of Idols.”

The evening starts with a “Liturgy of the Word”.  After an admonition, a reading from the book of Genesis, chapter 15, is read (The Covenant with Abram), followed by the singing of Kiko Arguello’s song, “Abraham”.  After another admonition, another reading from the book of Genesis is read (32:23-33; 35:1-12).  Jacob wrestles with an angel, renounces household idols, and builds an altar at El-Bethel.  After another Kiko-song, “Jacob,” is sung, and after a third admonition, the third reading is read, from the book of Joshua, chapter 24.  In this reading, Joshua urges his people to “put away the foreign gods that are among you”.

Now, upon the invitation of the lead catechist, the Rite of Renunciation of Idols begins with a dialog.  When all the members are sitting, the “President”, which is very often the Bishop, invites the members to stand up and then he says,

President:  “Choose you this day , brothers and sisters, whom you will serve, whether the one God revealed in Jesus Christ or the idols of this world. “

Assembly : “Far be it from us to abandon our God to serve other gods .”

President : “So you are witnesses against yourselves that you have chosen to serve God. “

Assembly : “We are witnesses.”

President :  “Now set your heart to the Lord our God .”

Assembly: “He only will we serve and listen only to his voice .”

President:  “Cast away from among you the idols of the world, renouncing them in front of the Church.”

The lead catechist then invites the members to come forward, one by one, and put the “sign” that they brought into the basket or bag at the front, or put it near the basket.

What are these “signs”?  Substantial amounts of cash, checks, titles to automobiles, titles to property, expensive jewelry and heirlooms, etc..  Members are coerced by the catechists with words like, “Show that you are bigger than your idols!”, or “Throw it into the fire!”

Of course, nothing goes “into the fire”.  Everything is eventually liquidated by the community responsibles (managers), and…but I’m getting ahead of myself.

After offering their “sign”, each member goes to the microphone, and standing in front of the community, points their finger at the door, and addressing Satan, says something like this:

I, Susannah, renounce you Satan, because you have deceived me [giving specific examples] and I put my faith in Jesus Christ today.”

After saying this, each member approaches the President (Bishop or priest), kneels, and quietly says,  “I want to be accepted into the catechumenate .”  the Bishop or priest then lays his hands on the member and quietly prays the prayer of exorcism.

When all have done this, the President prays a short prayer, and the community sings the Kiko-song, “Shema Israel”.

The community is not immediately told told what will happen to the money – they will learn this a day or so later during the “Catechesis of the Way”.  Then they will learn the the newly elected community responsibles will open a bank account using the checks and cash.  All the other items are liquidated (sold) over time, and proceeds deposited into the account.   None of this money will appear on the parish ledgers, nor will it appear on any tax forms.

As you can imagine, a single scrutiny could easily bring in over one hundred thousand dollars in “loot”.  A part of the funds are taken by the responsibles to poor families in the parishes, but fully a third of the loot will go to the Bishop, personally, NOT to the diocese.  No accountability, no strings attached.  Do you still wonder why many bishops love the Way?

At least a third of the loot collected from each community’s second scrutiny goes to the (Arch)bishop.

After the money has been distributed, the Second Scrutiny is deemed to be “closed.”

In part 5, we’ll find out why members keep all these things so secret.  Stay tuned. 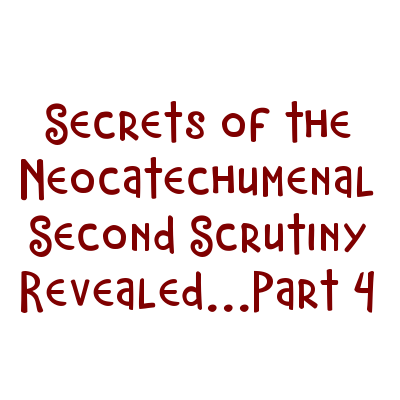