You can not tell anyone who comes after you the deepest secrets of the Catechumenate. Besides, it would be useless and people would think that it is ridiculous.  If the rumor gets around town that in order to enter these communities, one must sell what they own, then no one will come to the catechesis anymore.”  Kiko Arguello, Catechetical Directory, Vol. 4.

When we left off in Part 4, the community members had just offered up a significant part of their own wealth in the form of cash, jewelry, family heirlooms, land, automobiles and other items in order to be deemed worthy to progress to the next stage of “the Way”.

The second scrutiny initiates a substantial revenue stream for the Way, and anything that might dissuade others from joining the sect, such as coerced donations and psychological abuse, must be kept strictly secret.

Kiko’s plan for doing this is ingenious.  He took a treasured element of the traditional catechumenal process, the Rite of Salt, and gave it his own twist.  You see, while the primitive Church did keep certain doctrines secret from catechumens and heathens during the height of the persecutions against it, primarily the nature of the Eucharist, the Holy Trinity, and the Lord’s Prayer, it largely abandoned the practice by the fifth century.  Kiko twists some some verses of Sacred Scripture not traditionally associated with the Rite of Salt to serve this purpose, as he’s done before with his interpretation of the gospel story of the Blind Man and the Mud.

The Rite of Salt begins with an admonition for two scriptural readings. The second of these readings includes the well-known words of Jesus in his Sermon on the Mount regarding salt:  “You are the salt of the earth…” Matt. 5:13-16.  While that’s in keeping with the traditional rite, it’s with the first reading that Kiko does his damage.  That reading is from the second chapter of the Book of Revelation:

“He who has an ear, let him hear what the Spirit says to the churches. To him who conquers I will give some of the hidden manna, and I will give him a white stone, with a new name written on the stone which no one knows except him who receives it.” Rev. 2:17

In his Catechesis of the Salt, Kiko explains,

“You will receive, in the rite, a crystal, a white stone, a pebble, not small, white: a salt crystal you need taste.  You will not receive the salt, but a crystal, a white stone.  Of this pebble Revelation speaks: “I will give the victor a white stone that has a name no one knows but the one who receives it.”  Because in the early Church the mysteries of the catechumenate were kept secret, and were called “archani”.  You could not talk about what going to happen next.  You can not tell anyone who comes after you the deepest secrets of the Catechumenate. Besides, it would be useless and people would think that it is ridiculous.  If the rumor gets around town that in order to enter these communities, one must sell what they own, then no one will come to the catechesis anymore.  This happened to Barajas (Baracas),  a district of Madrid. There was a rumor that one had to give away one’s goods and people did not come to the catechesis.  They said: “You go! Would I do like the one who sold his house?  No! “.  Therefore it is very important that nobody boasts or makes this public because people who are outside of [our] environment will not understand.”

With these words, Kiko offers a false and deformed interpretation of the meaning of the “white stone” in this passage from the book of Revelation.  The greek word used in these verses is “psephos“, which means, “pebble”, not “salt”.   No

exegete interprets these verses as speaking of salt.  In those days, pebbles were used for casting votes, and St. Paul, in Acts 26:10 (the only other time the word  is used in the New Testament) uses the word in that sense.  White pebbles were used for votes of acquittal. Pebbles were also given to victors of an athletic contest as tickets to the great banquet that followed the contest and they were used by some as amulets which were thought to offer protection to the bearer.

The word for salt used in the New Testament is “halas“, not “psephos”.  In addition, the “new name” of Rev. 2:17, according to scripture scholars, is the name of Jesus himself, or, according to others, the name, “Christian”.  It does not refer to secret practices.

Now brothers, we will do a catechesis, and an anaphora over these salt crystals, these white stones.  A prayer to the Lord, as over the the bread and wine; this is the prayer of Baptism, that is on the salt, asking the Holy Spirit to descend upon this salt so that it becomes a sacrament, a sign, and operates in each of you according to what it means.

The rite continues with the prayer over the salt (anaphora).

Kiko gives these instructions for receiving the salt:

Well, brothers, you shall receive this salt, this crystal burns, that you will taste. You will put your hands as in communion, right under the left, in the form of the cross, and the white stone will be place in your crossed hands.

The presiding Bishop or priest says, “Receive the salt of God’s Wisdom, that will preserve you for eternal life.”  The “catechumens” respond, “Amen!“

A grain of salt is given to each member, and after they contemplate the crystal for a while, they place it on their tongues.  The assembly sings the song, “The Same God”.

The conclusion to the rite begins with a prayer by the presider, which is followed by a closing hymn, “If the Lord does not build the house” Psalm 126 (127), and then a final blessing.

After the ceremony, the people are invited to a meeting the following day for the Catechesis of the Way, and then all go to a restaurant for a great feast.  The priests and responsibles make the inventory of the loot collected during the scrutiny by drafting a document and signing it jointly.  All this is kept secret. 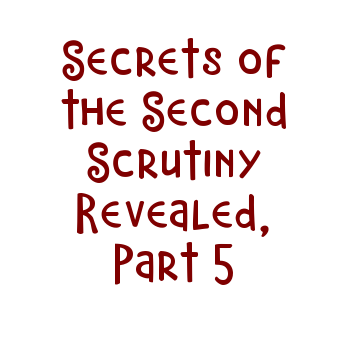 6 thoughts on “Secrets of the Second Scrutiny Revealed, Part 5”