Suppose an anthropologist, presumably an expert in the study of Chamorro culture and history, published an article on contemporary funeral practices on Guam in a respected, peer-reviewed academic journal.  And suppose the expert claimed, when describing a typical contemporary Chamorro Catholic funeral in that article, said:

You’d probably think that the expert allowed a “typo” to remain in his article.  After all, anybody who has attended a few funerals on Guam knows that the casket is closed after the viewing and immediately before the funeral mass, and then remains closed.

But suppose, reading more in the same paragraph, you see that the professor made the same mistake again:

…At the end of the mass with the body present, the casket is closed…

The casket is closed at the end of the Mass?  Now you know that this is not a typographical error.  When the casket gets closed may seem inconsequential, but his statement shows that the professor must have never attended a Chamorro funeral prior to writing the article on funeral practices on Guam!  It’s very easy to attend funerals on Guam, so you’d be tempted to doubt the credibility of anything else the professor might have said pertaining to contemporary Chamorro funeral practices if it was obvious that he didn’t even bother to observe even a few funerals himself.  Right?

Here’s a snapshot of part of the title page:

And later on that same page:

Again, the exact time the casket is closed might seem inconsequential, but it’s very tempting to doubt Professor Atienza’s credibility about anything else he might say on this topic, if he didn’t even get the easy stuff right.  And the professor did indeed make some other assertions about Chamorros and their beliefs and practices regarding death.  In the same article he wrote:

So, in Dr. David Atienza’s “expert” opinion, Chamorros believe that even unrepentant murderers will go to heaven if only their families pray the rosary after they die.   Repentance and conversion are less important than rituals and devotions for the indigenous people of Guam, he says.

Unfortunately this “expert” in Chamorro beliefs neglected to back up this particular claim with any shred of evidence whatsoever, and included no polls or studies, and no credit to any other source for this assertion.

You’re probably flabbergasted, right?  Well, remember that Professor Atienza is a Neocatechumenal missionary, and brings to Guam his sect’s animus toward natural religiosity, as well as a conviction that Catholicism has been contaminated by archaic religions.

Are you an academic hack, Professor Atienza? 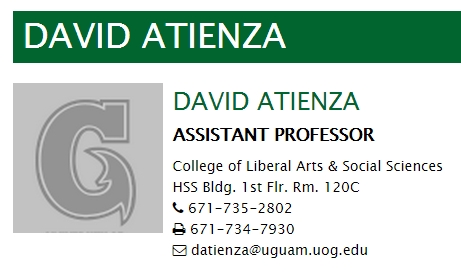 3 thoughts on “An Academic Hack”