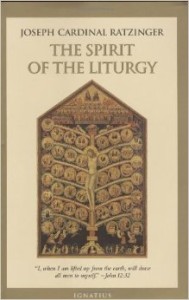 So begins Joseph Cardinal Ratzinger’s book The Spirit of the Liturgy.  Without a doubt, these questions about the Church’s highest prayer are urgently relevant to the life of Christians today.  Misunderstanding them and answering them incorrectly will have a profound impact not just on how we worship the Lord, but also on how we live in the world. Indeed, in the 50 years since the Second Vatican Council, it has become clear that it’s no coincidence that improper liturgical expression has gone together with a loosening of faith and morals. With this book, Ratzinger sought to help us rediscover the liturgy in all its beauty and its place in the universe, and thereby helping us recover our understanding of our relationship with God.

Those first questions capture the central themes of the book, which Cardinal Ratzinger wrote in a non-official capacity several years before he became Pope Benedict XVI.  It’s non-official in that the book contains his personal thoughts, and should not be treated as magisterial Church teaching, especially in light of the Cardinal’s position at the time as the Prefect of the Congregation for the Doctrine of the Faith (CDF).  At the same time, however, the book does not contradict Catholic teaching.  Certainly, it would have been outrageous if the Prefect of the CDF had written a book promoting heresy!

Writing for a non-scholarly audience, Ratzinger writes in his trademark, beautifully worded style, drawing heavily on Scripture and academic sources in a way that keeps readers engaged without compromising the depth and clarity of the content.  If we were to summarize the book according to questions, the questions would follow this order:

I included the more-specific questions about Christmas in Australia, facing east, and the Zairean form of Mass to pique prospective readers’ interest.  This book is far from a dry and academic treatment with nothing but abstract concepts.  To the contrary, it has the right mix of pure theology and practical guidance.

As a whole and within each section, the book is both a presentation and a proposal.  Ratzinger explains what the liturgy is and why it is so, as well as arguing for how it should be. In the preface to the book, he likens the liturgy to a fresco that had been preserved but encrusted with whitewash after many centuries. In the twentieth century, the Liturgical Movement and, later and most especially, Vatican II, scraped off that whitewash to reveal the vividness that was underneath.  However, having been re-exposed, the fresco soon became subject to climate, reformation, and reconstruction.

In the media and among many Catholics, Ratzinger has often been unfairly characterized as a doctrinal and liturgical ultra-conservative, as someone who rejects any change—even as someone who would prefer to return to the pre-Vatican II Mass. This book, however, reveals otherwise.  In fact, Ratzinger was greatly influenced by Fr. Romano Guardini, who had written a much earlier book with the same title, and which called for liturgical reform—or perhaps restoration and renewal are more accurate terms. In Ratzinger’s book, Ratzinger very much favors liturgical development, but in an organic, natural way—as in how a plant grows—and not through artificial and experimental means.

One topic into which I hoped Ratzinger had delved more deeply is on “active participation” (participatio actuosa), that famous and often-disputed phrase used by Vatican II’s Sacrosanctum Concilium. He emphasizes that “active participation” primarily means to unite ourselves, internally, in the prayer of the Mass, most especially the Eucharistic Prayer.  External action is secondary to this internal unity in prayer.  While I completely agree that unity in prayer must be the central focus of “active participation,” I would have liked to see more guidance on what that means externally, since much of the dispute about that phrase has to do with external actions and who performs those actions.

I highly recommend Joseph Cardinal Ratzinger’s The Spirit of the Liturgy, in particular to “cradle” and “cultural” Catholics who, though they might attend Mass every Sunday, may not have been taught what it really is and why we do it.  Learning about the liturgy will help us to worship God the way we ought.  Learning about the liturgy will help us, as Christians, to understand where we came from, to persevere in this life from day to day, and to set our goal of joining the saints in the heavenly liturgy.

2 thoughts on “Book Review: The Spirit of the Liturgy”