As the Neocatechumenal Way becomes more established in your parish, many of you are undoubtedly very eager to expedite the adoption of Kiko Arguello’s New Aesthetic into your parish’s church building.  Let me suggest some steps you should take to accomplish this. 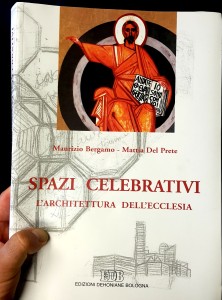 First, as quickly as you can, get yourself a copy of “Spazi Celebrativi, L’Architettura dell’Ecclesia” (Celebratory Spaces, the Architecture of the Church) by Maurizio Bergamo and Mattia Del Prete, Kiko Arguello’s chief architects. The book is a goldmine of information about Kiko’s New Aesthetic, and will certainly prove useful in hastening the makeover of your parish church and liturgies. The book is written in Italian, but don’t worry, there are lots of great pictures and I’ll be giving you a head start by discussing two of the authors’ important points in a minute.

After thoroughly acquainting yourself with the plans in the book, do everything you can to start a working relationship with

Mattia Del Prete or a member of his approved team of architects. The sooner, the better, and use the book to help you. You see, to conform fully to Kiko’s New Aesthetic, your church building and parish will have to be completely renovated, and only architects approved by Kiko can be hired for this. Mr. Del Prete was given approximately $80,000 by Catholics from Guam for the design of the “Sanctuary of the Word” at the Redemptoris Mater Seminary in Guam. Luckily for Mr. Del Prete, he did not have to actually design a new chapel with this

money, because it was decided that he would provide the plans from a chapel he already had designed in Macerata, Italy. The “Sanctuary of the Word” chapel on Guam was never built, but that’s beside the point, because you too will have to send them money – tens of thousands of dollars – for design and engineering plans. After you get the plans, you’ll then have to take them to an architect licensed to practice in your state, territory, or province to get them converted to English measurements and to include locally available materials and fixtures.  So, up and at’em and get started!

Now let’s take a brief tour of the book, along with pictures taken from it. Get out your pen and take notes, because I’ll be giving you some tips on how to put the advice of Mr. Bergamo and Mr. Del Prete into practice.

In a chapter called, “Critical Issues and Perspectives Opened by the Council”, the authors present five liturgical problems they say were addressed by the Second Vatican Council. Of these problems, the authors say,

“We wish to emphasize aspects that are often regressive and whose presence still prevents the realization of a real reform of the liturgy and then of designing an effectively renewed Church space.”

Since the authors have clearly said that the presence of these things still prevents liturgical renewal, let’s get you started on ridding your parish of two of them.

“It is typical of natural religiosity, from which came the great masses which expanded the Church, establishing with God a relationship in which you offer things to appease him and to obtain benefits: sacrifices, lambs, money, in some cases, human life itself. Israel also for a time had this kind of sacrificial worship…It remains today...The architectural consequences are considerable: first in the way of an emphasis sacredness of the rite, and then the environment, through the grandeur and wealth of architecture, mosaics, candles and lamps, incense, music.  This will also be the meaning of the gloom of the medieval halls, the upward Gothic forms, the phantasmagoria of the windows…The mysterious appearance is accentuated and the place of the liturgy is separated by creating a sacred area inside the same church, which only one category of persons may access, separate from the people involved, as mediators between the sacred and the profane: the clergy, the priests, as in rites of natural religiosity. even the altar,,,assumes more and more the shape of sacrificial altar: a block of marble, small in size, highly decorated on the side faces, placed in a very high position, over several steps, often contained in a second little temple consisting of the tabernacle that was sometimes closed further with curtains.”

It’s clear what you now have to do! Eliminate the sacrificial from your Mass!

Oh, I know that you were taught that Jesus was the Lamb of God, the sacrifice of the New Passover, and that in the Mass Jesus’s sacrifice on Calvary is made present.  Yes, there are plenty of scripture verses to support this. But get with the program! The sooner you forget that stuff and agree with Del Prete and Bergamo that the Church went to hell in a hand basket after the Emperor Constantine because of all those unwashed pagans, the better! So here are my tips to make it easier for you to get rid of the “sacrificial mentality” of your parish:

A second problem brought to our attention by the Second Vatican Council, according to the authors, is that of “private devotions”.  The authors say,

“The nineteenth century marks in the history of the Western liturgy, one of the moments of maximum impoverishment: participation by the people is long gone, replaced by a passive “to hear mass”, not only with the complete clericalization of worship, but also with the transformation of the dynamics of the rites in a series of private devotions to the most varied particular objects of worship….The adoration of Christ present in the Tabernacle, devotion to his heart and his passion, as well as the cult of Mary and the saints in its most varied forms said so much to the faithful that little or nothing is understood of the liturgical expressions;”

Here are my tips:

I hope that this book and these tips get you started well on your way to implementing the prophet Kiko’s New Aesthetic in your parish church.

Examples of “catecumeniums” from the book.  One chapel built for each community within the parish so that they can celebrate Mass separately, but simultaneously.  Sure to enhance parish unity!

Transparent chairs, and even a transparent  Eucharistic table!  This sure wasn’t designed by unwashed pagans.  Pure heaven!

Double-decker Tabernacles, for both the Blessed Sacrament and the Book of Gospels.  A sure way to undermine that Eucharistic adoration that itself undermines true renewal!

And last, but not least, a Spaceship/Flying Saucer church.  Take me to heaven! 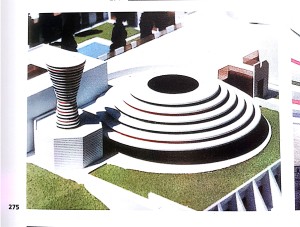 7 thoughts on “Get your parish Kiko-fied!”