This example is taken from a catechesis  on the Eucharist that is presented on Saturday during the Convivence that concludes the initial catecheses.  It is found in two short paragraphs attributed to Carmen Hernandez on page 349 of the 1986 Volume I, which I’ve translated from the Italian.2,3

“I always say to the Blessed Sacrament Fathers, they built an immense tabernacle:  if Jesus Christ had wanted the Eucharist to stay there, he would have made this in a stone that does not go bad.

Bread is for the banquet, to lead us to the Passover.  The real presence is always a means to lead us to an end, which is Passover. It is not an absolute, Jesus Christ is present as a function of the paschal Mystery. “

Now here are the same paragraphs, combined into one and heavily edited, in the “approved” English version (p. 359):

The bread and wine, the Body and Blood of the Lord, are essentially to be eaten and drunk and only secondarily to be exposed etc.  The bread and wine are fundamentally for the banquet, to take us to the Passover.  The real presence in them is always the means to take us to an end that is to fulfill the Passover in us.  Jesus Christ is present in function of the Paschal Mystery.

It is not an absolute?

Someone at the Vatican, likely in the Pontifical Council for the Laity, took a red pen to the Directory.  Gone are the phrases, “if Jesus Christ had wanted the Eucharist to stay there, he would have made this in a stone that does not go bad.” and “It is not an absolute.”

Imagine the eyebrows raised in the Holy See when they read that Christ’s Real Presence in the Eucharist “is not an absolute”.  If his presence is not “absolute”, then Kiko must believe that it is relative.  “Relative to what?” we ask.  The Catechism of the Catholic Church states:

The Eucharistic presence of Christ begins at the moment of the consecration and endures as long as the Eucharistic species subsist. CCC 1377

Christ should have used stones?

Or think of the dismay experienced by the Vatican officials when they read Kiko and Carmen’s assertion that Christ would have used stones if he really wanted the Eucharist reserved for worship.  Remember Pope St. John Paul II’s words:

“The Church and the world have a great need of Eucharistic worship. Jesus waits for us in this sacrament of love. Let us be generous with our time in going to meet Him in adoration and in contemplation…”  Dominicae Cenae 3

Now, you might be thinking, “Well, all’s well that ends well, the Directory is fixed now.”

Not so fast.  There are still plenty of errors in the documents, which you can read about here.  More significantly, though, is the fact that the original catechetical documents were transcribed from tape recordings of Carmen and Kiko in Madrid in February of 1972. 4 These documents contained the teachings that formed all of the men in Kiko’s inner circle, men like Giuseppe and Stefano Gennarini, and Mattia del Prete, and others in outer circles, like the Carmelite catechist Edwin “Pius” Sammut.  Men that exert a considerable influence in the sect today.  Moreover, there is no evidence whatsoever that communities are being taught using the “approved” documents.  They are secret and inaccessible to all but a few.

1 This example was provided by Lino Lista, a Catholic layman from Italy.

3 The original text was:

4 On the front cover page of the original document in Italian, you will see: 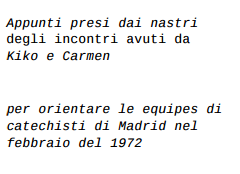