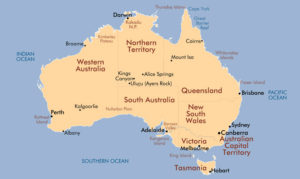 Here’s some shocking news out of Australia, folks.  The Neocatechumenal Way has had some problems with indigenous people!  Are you surprised?

In this case, a recent letter that I received from a Catholic gentleman in Australia provides an update on the current status of a parish that was taken over by “the Way” over a decade ago:

I found your blog site when I went looking for information on the Neocatechumenal Way. Your posts are very illuminating and interesting to read.

When I moved house recently, I went looking for a new church where I could attend Mass. I eventually ended up at St Vincent de Paul’s Parish in Redfern, Sydney Australia. It is a parish with a large aboriginal community living around it and used to have a strong mission to aboriginals. I was warmly welcomed by some older parishioners who I have found to be very well educated and well meaning people who are grieving the loss of so much ministry in the parish after the original parish priest died and the Neocats were moved in eleven years ago.

However after a few weeks there, I found it odd that the Neocat parishioners were rather aloof and secretive, if not uncommunicative. Before long it became obvious to me that the parish was split in half with the dominant half belonging to the Neocatechumenal Way. The followers of ‘The Way’ do not readily mix with the average parishioner (most of whom have left the parish). I was shocked to see how poorly the older parishioners are treated by the current parish priest.  I was also told after a few weeks of being there that I should ‘be careful not to be seen to be mixing with the wrong crowd’. I found out the previous Neocat priest was asked to leave after he had a canon law case brought against him and his seminarians for employing  bully tactics, battery and deception. This same priest, by the way, one day showed up at a dying aboriginal man’s bed in hospital, had his photo taken and then left without a word to the poor soul. I also discovered the current priest had many complaints against him from his previous parishes in Western Australia.

When the current present priest is asked to clarify his sermons (which usually ape Mr Argüello’s sermons without context or reason) he gets flustered, then accuses people of being against him and has publicly berated individuals as having deep psychological problems.  The Neocats have successfully negotiated for the archdiocese here to fund their building a seminary here in Sydney. Presumably to provide the usual 5 year quick training into the priesthood.

Based on the sermons I have heard and what I have read, I find the theology either subtly lacking or very suspect and certainly not Catholic. I even now doubt that the Eucharist consecrated at Mass there is valid. This is one of the reasons I left the parish.

Kiko Argüello so dominates the movement that it is hard to avoid seeing a personality cult happening. I also feel there are tell-tale signs of an ancient heresy in their attitude to the eucharist and related doctrines of the Catholic faith. I think the Neocats are preaching more than just a protestantised Catholicism and I am not surprised that the suspect Cardinal Bugnini heaped so much praise on these people in the 1970’s.

Carmen Hernandez lays claim to having degrees in Chemistry (some sources say Physics) and Theology but I cannot find any information our even trace of the organisation she says she received her ‘theology degree’ from. Wherefrom does Argüello get his theology from? Divine revelation? His foment of ‘existential crises’  looks more like Pavlovian conditioning not conversion. His reference to existentialism sounds shallow, pseudo-intellectual and rather dangerous to the well being of the many souls he has attracted.

For my part I feel there is something seriously wrong with this cult-like organisation and i am dismayed that neither the Vatican nor archdiocese let alone individual priests are willing to seriously investigate this very suspect self-funded organisation. In reality it would seem the The Way doesn’t need the Catholic Church for anything other than juridical approval and placement in parishes for them to dismantle.

There are quite a few people in Australia that have suffered a deep pain because of the Neocatechumenal Way that I am sure would be happy to share their experiences with you.

Sursum Corda (an alias)
Here are some links that describe some of the trauma described in the letter:

And here’s a bit of background on the parish’s previous ministry to the Aboriginals.  It seems that the Jesuits (Society of Jesus) took over some of the ministries to the Aboriginals that were dumped by the new Neocatechumenal pastors.

The school on the St Vincent’s site was closed in 1967, just as the area became a centre of refuge again for Aboriginal people, after many were ousted from makeshift camps in south-east Sydney by the local council. By this time the Aboriginal population of the area was between 4,000 and 9,000, with poverty and overcrowding rife as discrimination prevented many Aboriginal people from renting a home. Complaints about police mistreatment of Aboriginal people in Redfern were also common.

It was around this time that Father Ted Kennedy, a former chaplain of Sydney University, was granted the Redfern parish. Shocked by the poverty and violence inflicted on the local population, he opened St Vincent’s presbytery up as a refuge to all Aboriginal people seeking shelter from poverty, homelessness and police brutality. Together with local Aboriginal woman Shirley Smith, better known as ‘Mum Shirl’, he initiated many vital local community services that remain to this day, including the Aboriginal Medical Centre and Aboriginal housing on the Block.

Father Ted remained as priest of St Vincent’s for 30 years, and was awarded an Order of Australia medal in 2001 for his services to the Aboriginal community. He died in 2005, and Sydney City Council made St Vincent’s a site of historical significance.

After a long period of development and consultation with the local community, Jarjum College was opened on the St Vincent’s grounds in March 2013. The school aims to preserve Father Ted and Mum Shirl’s vision of assistance and comfort for those in need – an aim that is reflected in the golden statue and profile bearing their likenesses outside the school walls.

Cardinal George Pell brought the Neocats to Sydney about 11 years ago. Prior to that, there used to be a very strong connection with the aboriginal community. This was fostered by the original (non-Neocat) parish priest Fr Ted Kennedy and and aboriginal woman affectionately known as Mum Shirl. There is a bronze statue erected to her memory outside the church. The former parish priest could not do enough for them. The Neocat priests are only interested in photo opportunities with them. Instead brought in the cleaner, singing, Tongans who have been converted to the Neocats.

The church key was taken away from the old parishioners so they can’t continue any of the personal ministries and ceremonies which might have had meaning for the aboriginals.

The Church was once bedecked with aboriginal art (all of it was stripped away during renovations by the archdiocese and never put back) – 0ne night some people broke into the church and painted a mural behind the altar anyway including JPII’s words to the aboriginal peoples when he visited Australia- the mural is not being preserved but hasn’t been removed either. Fears are that it will be allowed to peal away and will be painted over.

Remembrance ceremonies of those that have passed away (I saw with my own eyes how the Neocat Priest and his acolyte tried to disrupt this ceremony on Good Friday 2016). Once again suggesting aboriginal are not welcome.

Essentially most aboriginals stopped coming to Mass because they don’t feel welcome there. They are an ancient people who are extremely sensitive but have had their culture disrupted. They are a displaced people (yes they can be into drugs and mug people etc but generally they are very emotionally sensitive people who respond to sincerity). They love to sit and chat and share their life experiences and talk about connection and family. They are also very tribal and some will not speak to others if they are the wrong tribe for the wrong family name. The Neocats have no idea about them and certainly have nothing much to do with them. The Neocat Tongans won’t speak to them. The Neocat whites never try. Only the remaining old parishioners give them hugs and greet them and are warm to them.

I have never seen the Neocat parish priest talk to one except when he encouraged one aboriginal too go to confession with him. Fr Llabanes is obsessed with taking people into the confessional. He once even tried to coerce a white university law student (my acquaintance from church) into the confessional when the uni students said he was a bit tipsy. I assume its an opportunity to have a one on one to proselytise. Once you confess your sins they can use your guilt I suppose (my surmise).

There is no specific ministry to the aboriginals at Redfern
(Feeding the poor still continues but it is for all people not just aboriginals. About 10 or so still come, the rest are Chinese, drug addicts. destitute or very ill men. The feeding is split i two because the organisers made a mistake and invited someone else to come in and help. The new organiser (not a Neocat) has done a great job offering excellent food but there is no conviviality with the poor. Its rather rigid-sit down, eat, see you later. Presumably it its funded by the Neocat priest. But the Neocats have not issued a financial statement of parish finances in the 11 years they have been here. So no one knows where the money goes.

Seeing this the old parishioner set up their own feeding stall outside the church every week with their own money at the same time. Aboriginals come to talk to the old parishioners outside that they know. When it rained and the people outside moved into the church porch fir shelter the Neocat Priest Fr Melvin Llabanes tried too throw them out of the church saying it wasn’t safe for the to obstruct the porch (which wasn’t the case) ). The archdiocese has appointed a priest in the neighbouring parish to minister to them but he is nearly 90 and not really interested it would seem. There is a lay minister who tries every now and then to hold a Mass has limited success in drawing the numbers even though she is aboriginal herself.

I have seen only aboriginal come to hear Mass. She sits at the back of the church. If others come in its only to say hello to the old parishioners with whom they feel they have a connection.