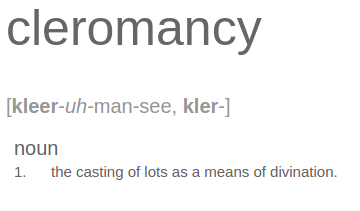 Merkaba.  The word, meaning “chariot” in Hebrew, connotes both the ritual lottery that decides where Neocatechumenal seminarians and missionary families are sent and the building in which that ritual takes place.

While examples of the casting of lots to determine the will of God do exist, the Merkaba ritual robs Neocatechumenal seminarians and missionaries of the fruits of prayerful reflection and careful consideration and study of culture and language in discerning the actual will of God for them.

Perhaps the best introduction to this peculiar and esoteric Neocatechumenal practice is to be found in Lino Lista’s book, “Il Fango e il Segreto” (The Mud and the Secret) on pages 88-90.  Here is an excerpt from that book, followed by my notes:

A dome of concentric circles is present in the projects (inspired and supervised by Kiko Arguello) of the three main buildings of the Way: in the Domus Galilaeae, in the Domus of Mamre and in Porto San Giorgio (the international center of the Way, in the photo).

Since the early times of the structure, the Neocatechumenals have called the building of Porto San Giorgio a spaceship, expressing the idea that it is “the spaceship that takes you to heaven“, a saying that descends from Kiko. In the first year in which the Beginning of the Year Convivence was held inside the building, instead of the previous large tent, the founder declared that he had wanted one “building exactly similar to a spaceship”. The shape really evokes that of a flying saucer and, in the imagination Neocatechumenal, symbolizes Merkaba, the ecstatic vision of the divine chariot of Ezekiel, one of the biblical themes swallowed up by various modern syncretic currents of the New Age.

The vision of Merkaba is a fixed idea of Kiko; you can observe it even in an icon of the Spanish painter, behind the crucifix, the wheels of the Chariot of Fire (Ezekiel 1: 4-26). The assembly hall of the Neocatechumenal Redemptoris Mater seminary is called Merkaba, and a processional cross drawn by Kiko has the same name. Merkaba is defined also as the rite in which Kiko randomly draws the names of the families who have to leave for the evangelization and the places where they must go. For the draw, they say: “Kiko has done the Merkaba”.  It is an allusion to a trip decided directly by God, evidently, a sort of cleromancy repeated at every step, a criterion of knowledge that surpasses human reason for learning the right decisions to be implemented; this also authenticates gnosis.

The attraction of the cofounder to Merkaba is not less.  In the catechesis on the Eucharist, shown in the first mamotreto, Carmen Hernandez reports: “The presence of Jesus Christ [in the Eucharist] is another thing.  It is the chariot of fire that comes to take us to glory, to make us pass from death to resurrection […]”.

The idea of the Neocatechumenals that the spaceship can transport to heaven is directly attributable to the esoterisms derived from the vision of Ezekiel, esotericisms that are scattered throughout the Talmud and Midrash. The mystique of Merkaba is one that leads to the vision of the throne of God and to the contemplation of the celestial world. To reach that, the ascetic must make a journey of perfection in degrees (seven levels). Gershom Scholem, one of the greatest investigators Jewish esotericism, wrote that for Jews, Merkaba replaces what the Greek mystics and the proto-Christian Gnostics meant by the universe of Pleroma and the eons. The mysticism of Merkaba is a form of Jewish gnosticism, then, an initiatory path.

“The ship that takes you to heaven”, the definition of the Neocatechumenals for the building with the dome of concentric wheels, seems to recall very well the work of the heavenly Chariot, by virtue of which in Jewish mysticism guides one into the realm of the unseen, into its secrets.

The word “merkaba”, which means “chariot”, does not actually appear in the first chapter of Ezekiel.  While the word does appear in other books of the Hebrew Old Testament, it is associated with Ezekiel’s vision in the Zohar, a semi-Gnostic Jewish mystical book, not the Bible itself.

Here the icon of the Merkaba processional cross found in Domus Galilaeae referred to by Lino Lista: 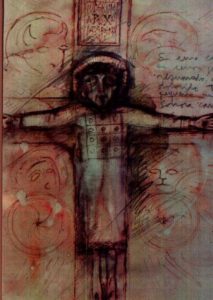 Note the image of the four spinning wheels behind the cross.  Note too the “breastplate of judgment” hanging on our Lord’s chest.  This garment, mentioned in Exodus 28:13-30, contained the Urim and Thummim, dice-like stones used by the Jewish High priests to determine God’s will.   We should question the appropriateness of inserting this garment into an image of Christ on the cross, for while we do consider our Lord to be a Priest, he certainly was not a Levite or of the house of Aaron. 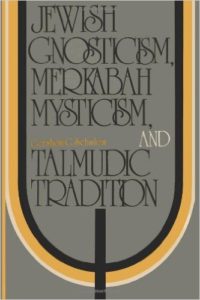 Gershom G. Sholem, the author mentioned by Lista, wrote “Jewish Gnosticism, Merkabah, and Talmudic Tradition“.  He is widely considered to be an expert on Jewish Gnosticism and Merkaba Mysticism.

Kiko’s reliance upon the Zohar is also confirmed by the fact that the “seven heavens” signified by the seven levels of his Merkaba buildings, is not described in the bible, but rather in the Zohar.  There they are called seven “celestial spheres”. 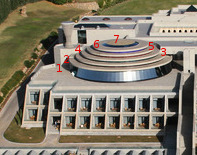