Many of you probably know of Kiko Arguello’s “New Aesthetic”, which is his attempt to impose his music, art, and architecture upon the Church.  I’d like to take you on a short tour of a chapel in Rome, the Cripta di Sant’Ilario di Poitier (Crypt of Saint Hilary of Poitiers), which belongs to the Neocatechumenal parish of St. Hilary of Poitiers there.  This chapel not only epitomizes Kiko’s  “New Aesthetic”, but also includes one very curious feature. 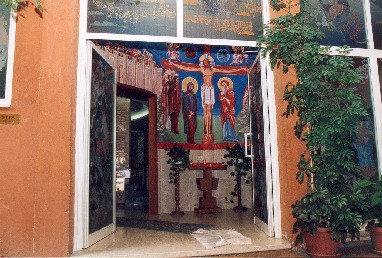 The web site of the Parish of St. Hilary provides a good explanation of how Kiko’s “New Aesthetic” is applied to the Cripta di Sant’Ilario, and this description can be applied to hundreds of other churches and chapels designed by him.  Here is a summary in English, but  click here or here to read it in Italian:

That’s why in the spatial form of our crypt manifests the body of the Virgin Mary…The central apse: the president’s chair: the head of the body, Christ coming on the clouds of heaven to take possession of his kingdom and give it to the Father:..The lateral apses represent the shoulders of the body, and according to ancient tradition, the merciful maternity of the Virgin Mary…The pulpit is the mouth of the body, where God speaks to His people in the proclamation of the Word…the Eucharistic table represents the stomach, where the church prepares spiritual food the bread and the wine to nurture and fortify its children…The baptismal font is the uterus, where the church gives birth to new life the sons of Adam by God’s children…the assembly is gathered around like the limbs of a well-structured body.

To put it simply, Kiko designs each of his churches as a body of a woman, the Blessed Virgin Mary.  Kiko uses this design in many churches around the world, and concept is amply described in a book co-authored by Kiko’s key lieutenant and architect, Mattia del Prete, called ”Spazi Celebrativi. L’architettura dell’Ecclesia (2003)”.  The book is cited here, and Kiko’s idea of basing the design of churches on the body of a woman is corroborated here and here.

Kiko emphasizes over and over again that the Neocatechumenal Way is a “way of gestation”, and he uses a form of the word “gestation” at least thirty-five times in the first volume of his Catechetical Directory.   Kiko proposes a “gestation”, not of a few years as in the primitive church, but an interminable gestation.   His “Way” mandates  obedience to the catechists in even the most basic decisions of life.  Always trapped in the “uterus” of a self-absorbed community, without end.   He is obsessed by the idea, as we shall soon see.

While several Church Fathers have compared the baptismal font to the womb or uterus of the Blessed Virgin Mary[1], there is no evidence that they were inspired to base the design of churches on the idea, as Kiko was.

This  diagram shows how the “New Aesthetic” is applied to the new church buildings designed by Kiko: (click diagram to enlarge) 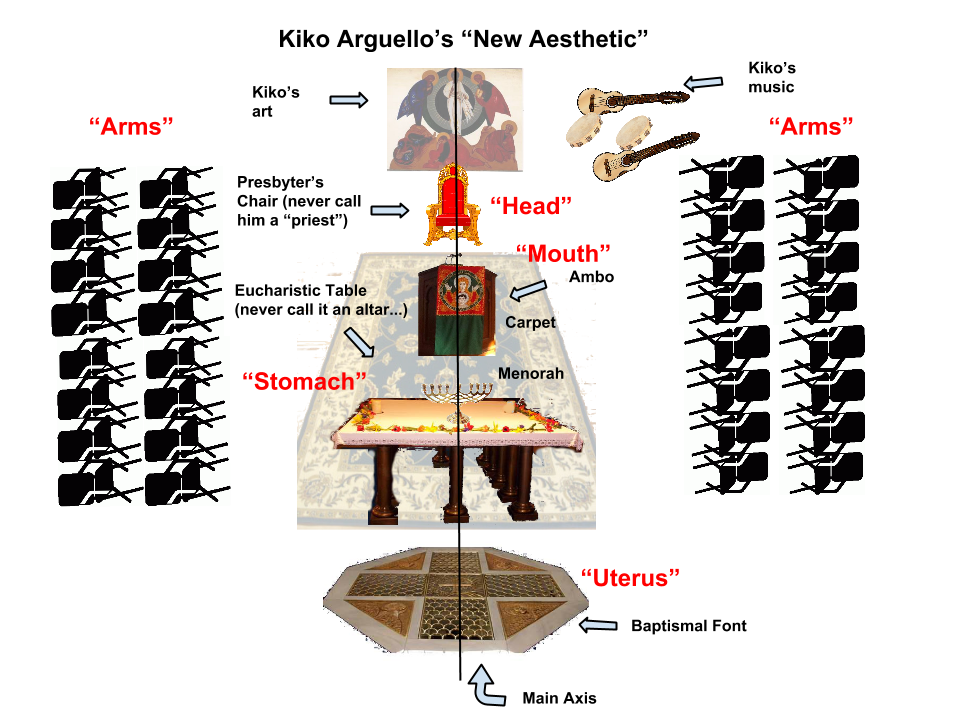 The “head”, “mouth”, “stomach”,and “uterus” are typically aligned on a main axis in Kiko’s churches:

I’m not arguing against the idea that baptism is a new birth, but I would like to ask some simple questions:

But back to the tour…

Now let’s enter the front door and begin our tour, because it’s getting late, and  I really want to have time to show you a most curious feature of Kiko’s Cripta di Sant’Ilario.

As we enter, we can see an icon of the St. Hilary, who was born in France, off to the side:

Here’s the ambo and presbyter’s chair: 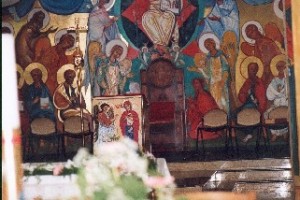 Turning around, let’s look at the oops, I mean “Eucharistic table”.  On the other side of the “table” is the baptismal font: 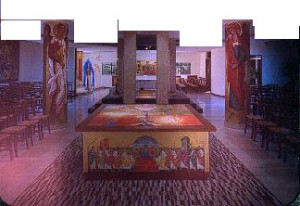 Let’s go over and get a view from the side: 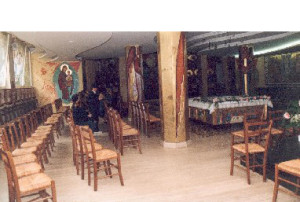 Let’s take a closer look at the baptismal font, which, you should remember, is a “uterus”: 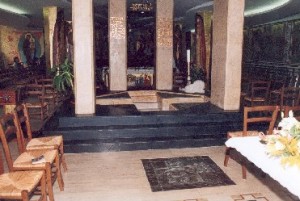 But this still isn’t the really curious part of Kiko’s Cripta di Sant’Ilario!  Let’s get to that now.

It’s the ceiling.  When one raises one’s eyes in many older Catholic churches and cathedrals, one is lifted to heaven[2], but when stands at the ambo and looks up over the baptismal font-uterus in Kiko’s Cripta Sant’Ilario, one is reminded of something quite different altogether, something decidedly carnal.   Let’s take a look: 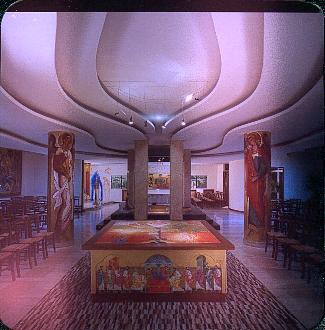 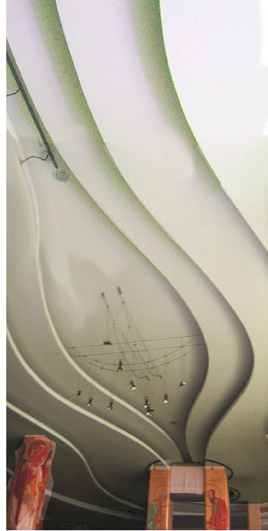 [2]   For example, see the Immaculate Conception Cathedral in Albany NY http://www.shobeiransariphotography.com/Albany-New-York/i-wc8MxtS/0/XL/Cathedral%20Ceiling-XL.jpg, or the Notre Dame Cathedral, Paris, France>> https://www.flickr.com/photos/s-d-s/3523735028, or the Chartres Cathedral in France, https://classconnection.s3.amazonaws.com/1890/flashcards/794230/jpg/chartres-cathedral.jpg, or the Serbian Orthodox Cathedral, http://www.schgoc.hi.goarch.org.php5-26.dfw1-2.websitetestlink.com/assets/images/Serbian-Orthodox-ceiling%20smaller.jpg