Kiko Arguello inserts a “catechetical message” into each of his significant works of art, and this icon found in the “Catechumenary” of “La Parroquia Del Transito”, in Madrid, Spain is no exception: 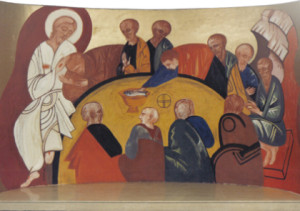 Do you notice anything strange or peculiar about it?

No?  We’ll come back to the picture in a minute, but let’s first discuss one of Kiko’s teachings, “The Doctrine of the Necessary Judas”.  This peculiar teaching has three components:

Here is a short recording of a Neocatechumenal catechist teaching this during the fourth night: 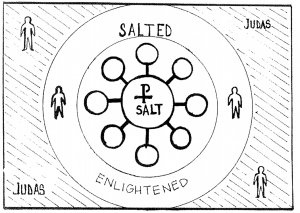 We see this “doctrine” clearly outlined in the first volume of the Catechetical Directory of the Neocatechumenal Way[1], and at first glance, it might seem reasonable to many Christians.

Judas Iscariot certainly had an active role in the Passion of Christ, but was he necessary?  Without him, would Christ have died for our sins?  Did God will that he betray Jesus?

Lino Lista, a prolific critic of the Neocatechumenal Way, responds:

“The decision to kill Jesus had already been taken (John 7:1) and He had already escaped from the hands of his adversaries, escaping from the precipice and stoning (Luke 4: 29-30; John 8:59; John 10: 31-39 ). Had he wanted to, Christ could have escaped capture even in the Garden of Gethsemane (Matthew 26:53: ” Do you think I can not call on my Father, that would give me more than twelve legions of angels ? “).  It was only up to Christ, therefore, to decide the time (John 7:30), the place and manner of his Passion. Only Christ is essential: Judas is not necessary and not even enough.”

Although Jesus certainly foreknew Judas would betray him[2],  Judas had free will.  He was not created or predestined by God to sin, but rather, chose that path himself.  The Council of Trent, which Kiko has been known to berate, taught:

“If anyone shall say that the grace of justification is attained by those only who are predestined unto life, but that all others, who are called, are called indeed, but do not receive grace, as if they are by divine power predestined to evil:  let him be anathema.”[3]

The Doctrine of the Necessary Judas has a sectarian purpose.  It allows Kiko’s followers to tag the label of “Judas” upon anyone who criticizes “the Way”, and to do so quickly with out thinking, and without discernment.

Back to the Icon

Now, back to the picture.

At first glance, it seems to be a picture of the Last Supper, so what’s wrong with it?

Let’s zoom in on Jesus in the picture:

He’s dressed in a white robe and the wounds of His Passion are visible, one apostle is missing, and the setting is outside, so the picture is not of the Last Supper at all, but rather, is a post-resurrection scene of Jesus and the apostles.  (Matthew 28:16-20).

Studying this icon a bit more, we see that Kiko has copied a Russian Last Supper icon similar to this 15th century icon:

Let’s put them side by side:

In fact, Kiko copied another icon of the Last Supper, his “Ultima Cena (Last Supper) icon, from this same work:

Let’s put them side by side to see (click each picture to see a larger version):

Who is the apostle reaching across the table to put his hand in the dish?

It’s Judas!  In the Last Supper icons, pursuant to the iconographic tradition of the Eastern Church, Judas is the one portrayed dipping his hand into the dish (Matthew 26:20-23)[4].  Click here, and here, and here for proof.  Here are other icons from the Eastern Church that portray Judas at the Last Supper, with his hand in the dish.  Note that in the third one, Judas is the only apostle without a halo:

Let’s zoom in on Judas in both of Kiko’s icons:

Here’s the problem:  In Kiko’s post-resurrection icon, Judas is with Jesus and the other apostles after the Resurrection!  How can that be?  The scriptures tell us that Judas killed himself after Jesus’s crucifixion (Matthew 27:3-5).  Jesus himself called Judas the “son of perdition” and said that he was “lost” (John 17:12), and the apostles actually chose a replacement for him (Acts 1:12-26).

Do you think Kiko painted Judas with the resurrected Jesus out of ignorance of Eastern iconography?  I highly doubt it.  Kiko is brilliant and certainly knows the history and traditions of iconography.  So then, what point is he trying to make?

First, Kiko wants to remind his followers of the Doctrine of the Necessary Judas.  This false doctrine allows Kiko’s followers to tag the label of “Judas” upon anyone who criticizes “the Way”, and to do so quickly without thinking, and without discernment.

Second, despite the preponderance of Scriptural evidence to the contrary (e.g. Matthew 26:24, and John 17:12), and despite the fact that the Church has never made a definitive pronouncement on the matter, Kiko teaches that Judas Iscariot has been saved!

[1] From the Neocatechumenal Catechetical Directory or “Mamotretos”, Volume I:

Finally, there is a third circle, a third group of brothers and sisters, those who live a lie, who have always lied to themselves. They are those in whom Satan acts, enslaving them.  Not necessarily because they are wicked, or due to any fault of their own, but perhaps for some reason or other that we will not investigate. Maybe these are the richest people, humanly speaking, the most intellectually gifted. (Judas was perhaps the brightest of the apostles, which is why he kept the purse … )  These people cannot stand the community. This mission is very important because, without Judas, there is no Paschal Mystery of Jesus Christ. If you are called to be Jesus Christ, you must have your Judas.  Each of you here will have your hour. Your life is in function of assuming an hour. Jesus Christ was waiting for his hour to arrive and one day he said: My hour has come (see Jn 12:23). I hope that one day all of you will be able to say the same: My hour has come, the hour to give testimony of Jesus, the hour to be raised up, the hour in which the Father will be glorified in you. All Christians are called by God to take on this hour.

When that day arrives, these people will have the mission of killing you, of destroying you. Fundamentally, they live dominated by the devil because they have never been loved…The only way for these brothers and sisters to be saved is for the Church to give her blood for them, the blood of Christians, which is the blood of Jesus Christ. They will kill you and you will give your blood for them, as St. Stephen gave his blood for those who stoned him. In that way, they can all be saved.  Page 82, Day 4.

The full text from the Catechetical Directory may be viewed here.

[2] “When it was evening, he sat at table with the twelve disciples;  and as they were eating, he said, “Truly, I say to you, one of you will betray me.” And they were very sorrowful, and began to say to him one after another, ‘Is it I, Lord?’ He answered, ‘He who has dipped his hand in the dish with me, will betray me.'”  Matthew 26:20-23

[3] “If anyone shall say that the grace of justification is attained by those only who are predestined unto life, but that all others, who are called, are called indeed, but do not receive grace, as if they are by divine power predestined to evil:  let him be anathema.” Council of Trent (1545-1563), Canons on Justification, Canon 17

[4] Eastern icons portray Judas, dipping his hand into the dish at the Last Supper:

When it was evening, he sat at table with the twelve disciples;  and as they were eating, he said, “Truly, I say to you, one of you will betray me.” And they were very sorrowful, and began to say to him one after another, “Is it I, Lord?” He answered, “He who has dipped his hand in the dish with me, will betray me.  Matthew 26:20-23

When Judas, his betrayer, saw that he was condemned, he repented and brought back the thirty pieces of silver to the chief priests and the elders,  saying, “I have sinned in betraying innocent blood.” They said, “What is that to us? See to it yourself.” 5 And throwing down the pieces of silver in the temple, he departed; and he went and hanged himself. Matthew 27:3-5

“Then Satan entered into Judas called Iscariot, who was of the number of the twelve”   Luke 22:3

“Then after the morsel, Satan entered into him. Jesus said to him, ‘What you are going to do, do quickly.’” John 13:27

One thought on “The Doctrine of the Necessary Judas”