They say that a picture is worth a thousand words and Kiko Arguello, an artist and the founder of the Neocatechumenal Way, certainly knows how to use them effectively in his teaching.

Here is Kiko’s diagram of Salvation History taken from page 53 of the first volume of the Neocatechumenal Catechetical Directory, otherwise known as “Guidelines for Teams of Catechists”:

Like any timeline, one should read this from left to right.  One can see that Church history starts from the figure of the Cross.  Let’s zoom in on that part of the timeline: 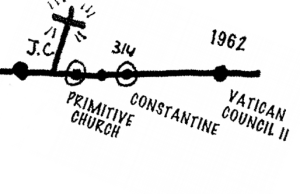 What do you think?  Did Kiko miss anything?

Well, he’s got the beginning in there, and he’s got Constantine (and his Edict of Milan by implication).  And of course I’m glad he thought to include the Second Vatican Council.  But what’s in between Constantine and Vatican II?  Nothing, absolutely nothing.

Does this strike you as strange?  What about the other twenty ecumenical councils?  The Councils of Nicaea and Constantinople where the heresy of Arianism was finally turned back after sweeping through two thirds of the Church?  Or the Council of Trent which addressed the problems at the root of the Protestant reformation?  No, they are all missing.

And if the councils aren’t your cup of tea, what about the cataclysmic split of Churches of the East and West in 1054 AD?  Or the rolling Protestant reformation five centuries later?

And people.  Why aren’t any of the great Doctors of the Church listed?  St. Augustine, for example, or St. Thomas Aquinas?  Or how about the two mendicant friars who shook up and brought great renewal to the Church, St. Dominic and St. Francis?  Or the great mystics, like St. John of the Cross or St. Teresa of Avila, to name just two?

I could go on and on, but I’ll tell you why I think Kiko’s timeline of Church history is blank:  he does not believe that anything worthy of note happened in Church between the Emperor Constantine and the Second Vatican Council.  For him, it was a dead time, a time of apostasy, bureaucracy, and malaise.  The Holy Spirit must have been sleeping, no?  Until, of course, he, Kiko Arguello, showed up on the scene, two years after the start of the Second Vatican Council.

Thus far, I have only concentrated on the history of the Church, and neglected the left side of the timeline. Taken together, Kiko is describing his version of Salvation History and trying to make a point while doing so.  Let’s look at this side now:

There are a few interesting things to notice about that side of the picture. For one, he doesn’t start out with the Fall of Man, as you would expect, but rather with Abraham.  He does have Moses and David in there, as he should, but he leaves out a lot in favor of the Babylonian Exile.  Why is that?  The exile certainly is part of Salvation History, but why let it dominate the timeline? Well, notice that Ezra and Nehemiah are listed. Ezra and Nehemiah were a priest and layman who rebuilt Jerusalem after the Exile and reestablished proper Temple worship and the practice of the Mosaic Law in Jerusalem.  Of course, this was good, but their presence on the timeline and the emphasis on the Exile is supposed to complement the time that the Holy Spirit was asleep between Constantine and the Second Vatican Council and Kiko’s arrival. Ezra and Nehemiah “rebuilt Judaism” (Kiko’s words) and Kiko will rebuild the Church.

So the question is, has the Church been destroyed, like Jerusalem after the Exile, and are we looking for the Church to be rebuilt by Kiko?  Or, despite our sinfulness, has the Holy Spirit indeed been at work in our Church since Constantine, and instead are we seeking its authentic renewal?

18 thoughts on “Kiko’s History of the Catholic Church”