Some 400 million of the world’s people speak Spanish as their native language in 21 countries around the world.  Follow along while I take you on an adventure of a “quantitative” nature to prove that the Neocatechumenal Way’s growth rate is greatly declining in these Spanish-speaking countries.

The Neocatechumenal Way, like many other groups and movements, often boasts of its “numbers” in order to impress and recruit.  For example, click here to see an example of Desiderio Parrilla Martinez, a Neocatechumenal academic, spout NCW  “numbers” to defend the NCW’s liturgical practices.   “Our liturgical practices must be okay because We have 100, seminaries, 1.5 million members, yada, yada, yada.”  Despite the rhetoric, the rate of growth of the Neocatechumenal Way in Spanish-speaking countries is on a serious decline.    The evidence for this may be found using the powerful “Google Trends” tool, which one can use to show the level of public interest in a topic over time. 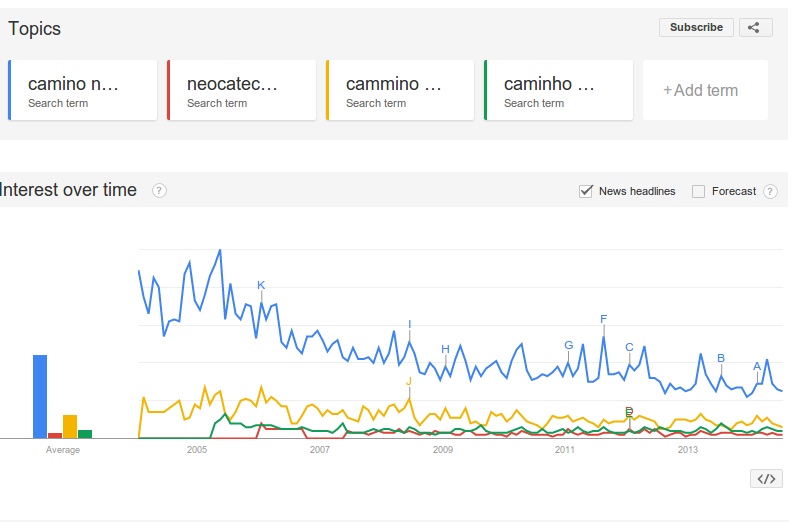 Click here to view the chart as of today.

What do you notice?  First, the relative numbers of searches for the Neocatechumenal Way in Italian has decreased slightly over the last ten years, the queries in English and Portuguese have remained relatively stable over the last ten years and all three are far fewer than the searches in Spanish.  But the really striking thing that we see is that the relative number of Spanish language searches for “Neocatechumenal Way” have dropped precipitously over that timeframe.  By almost 60%, as a matter of fact.

How do we know that this drop in searches is related to growth in NCW membership?  It’s simple, really:  most of the Google searches done around the world for the phrase “Neocatechumenal Way” are performed by people coming in contact with the NCW for the first time, either through parish announcements for the NCW initial phase of catechesis or by attending those sessions.  Moreover, the number of people participating in the initial phase of catechesis of the NCW is proportional to the number of simple Google queries about the NCW.

Let’s drill down to some specific countries.  For the last twelve months (see the chart below), Spain, the birthplace of Kiko Arguello and his Neocatechumenal Way, was roughly tied with Venezuela (as of July 2014), behind Peru,  and Colombia in numbers of basic NCW Google searches.  The people of Peru submitted 42% more of these Google queries than the people of Spain did, but that country has 25% fewer Catholics than Spain! 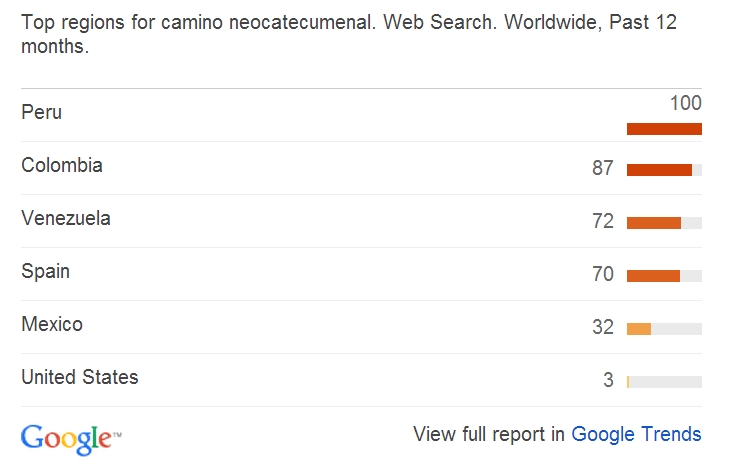 Here is a chart of queries for “Camino Neocatecumenal” in Spain, Peru, Venezuela, and Columbia over the last ten years. 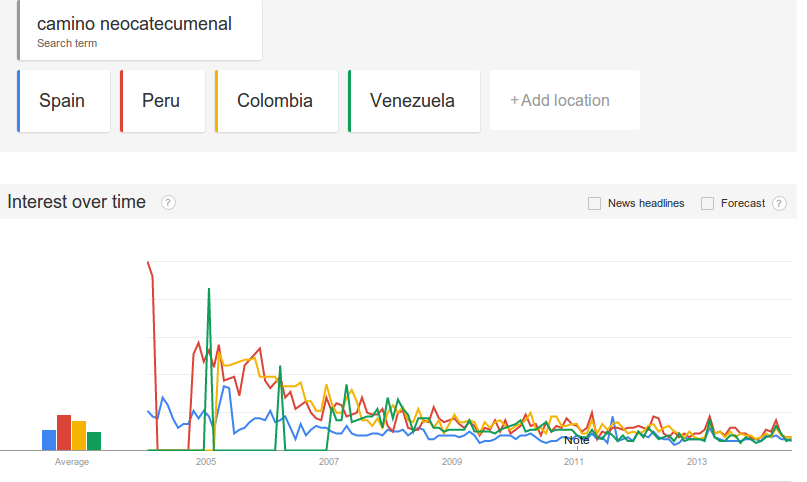 Click here to view the chart as of today.

Peru, the leader, suffered the most serious drop in public interest as expressed in search queries, but Columbia also suffered a drop, and queries originating in Spain are definitely at the bottom.

I Can Hear the Scoffers Now

“LOL, What do Google Searches have to do with conversion and adult faith?”

As a matter of fact, there are a growing number of rigorous studies that show that search queries are indeed correlated to people’s behavior and circumstances.  Check out this scientific study that used Google Trends to accurately track influenza epidemic outbreaks in the U.S.  In this case, people start Googling when they have flu-like symptoms well before they visit a doctor.  And they do the same when they hear the strange word “Neocatechumenal” for the first time too.  Modern people have no inhibitions about doing Google searches and turn to the search engines with just about any question they have.

“LOL, the NCW is concentrating on the evangelization of the poor, who have little or no internet access.”

Nice try.  But take a look at this interactive tool, called Search Globe, that the Google folks came up with to view search request volume by country and language:  http://data-arts.appspot.com/globe-search/.  If you take it for a spin, you’ll see that people in Spanish-speaking NCW “hub” cities like Lima, Bogota, Buenos Aires, Medellin, Quito, and Caracas are not disadvantaged at all when it comes to the ability to perform a Google search.

“LOL, your conclusions cannot be correct because the number of new Spanish-speaking communities started in the NCW every year exceeds the others that are started.”

Because of its ingrained Hispanic culture, the NCW  is initially more readily accepted by Spanish-speaking Catholics, leading to a higher initial growth rate than one would find in non-Hispanic cultures.  But several things quickly contribute to forming a limit or saturation point in those cultures:

This bottoming out of the NCW’s evangelistic efforts among Spanish-speakers does not bode well for the movement’s future and belies the Kiko’s boasting about numbers.  The bloom is off the rose, and the Neocatechumenal Way is not the future of the Catholic Church.  ¿Comprendes?

One thought on “The Bloom is Off the Rose”