I recently found this picture of Kiko’s colorful fresco, “the Last Judgment”, which adorns a wall in the Neocatechumenal Way’s Domus Galilaeae palace in Israel: 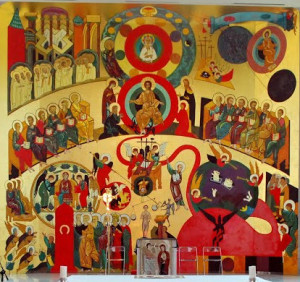 I found, to my surprise, that the work was not original, but was based upon a work that originated in the fifteenth or sixteenth century in the Russian Novgorod school of icons.  (By “school”, I do not mean “an institution of learning”, but rather a a group of artists that share similarities of time, culture and influences.)

Here is the piece that I believe Kiko copied, which is currently in the Tretyakov Gallery in Moscow:

While trying to decypher it, I found myself wondering, “What does Kiko actually teach about the Last Judgment?”   The answer to that question I believe, can be found in the differences between the ancient work and Kiko’s copy.  Can you find any?  We’ll revisit the fresco at the end of this post.

What does Kiko Teach in his Catechetical Directory?

After studying the fresco a bit, I began my search for an answer to my question in the first volume of Kiko’s “Catechetical Directory for Teams of Catechists.”  There Kiko, in a catechesis associated with the third day of the Neocatechumenal Way’s Initial Catechesis, says:

“In all religions there is the sense of life seen as a trial with a final judgment ending in punishment for the bad and reward for the good. Christianity is more than this. Christianity says that we are all already judged and that the judgment on all sins has been made on the Cross of Jesus Christ who has forgiven us all. God has already judged the sins of men.” p. 59.

If we stopped here, or rather, if Kiko stopped here, one might  arguably claim that Kiko is not denying that Christians will avoid a final, last, or general judgment, but rather re-expressing Church teaching in an innovative way by using “judgment” and “forgiveness” synonymously.  After all, in any kerygma, or first, summary presentation of the Gospel, love and forgiveness should be emphasized over judgment.  Let me repeat that, and set it apart in bold, so there is no misunderstanding when you read what I say later:  In any kerygma, love and forgiveness should be emphasized over judgment.

But, you should know, Kiko does not stop there, and neither should we.  He is not merely “deemphasizing” judgment.

To see, this, let’s move on.  First, we read, again in Volume 1, in a catechesis associated with Day 4 of the Initial Catechesis, this:

“And since Christianity is not based on the law but on good news, which announces that we are all sinners before the law but that in Jesus Christ we have been judged and all our sins have been forgiven and that now there is a second judgment, (emphasis added) which is to accept or not accept this free pardon.” p. 64.

And in a catechesis in the same volume associated with Day 10,

“After these initial catecheses, the day before last, I have announced to you the kerygma, the Good News that all of your sins are forgiven. God has made a judgment on our sin, on our robberies, on our adulteries, on all our situation of sin and his judgment has been mercy. But now, brothers and sisters, there appears a second Judgment: to accept or not this mercy.”  p. 211.

We have already said that God has judged the sins of men and that his judgment has been mercy. But now there is a new judgment: to accept or not accept this forgiveness, this mercy.” p. 218.

and again in a catechesis associated with the final convivence of the initial catechesis:

“God has judged the sin of men and this judgment has been forgiveness. The verdict of God in front of our murders and sins has been mercy. Now, this forgiveness is announced and there is a second judgment: whether this free forgiveness is accepted or not.” [p. 388]

So, five times in the initial catechesis, Kiko teaches that there are two judgments.   Since we have no evidence that Kiko rejects the teaching of the Church that “there is no repentance for men after death” [CCC 393], we have to assume that for him, the first and second judgments, at least for Christians, happen prior to death, not after it.

And there is more.

In the first volume of the Catechetical Directory, in a catechesis associated with the fourteenth day, Kiko describes what happens when a Christian dies:

For the person who believes in Jesus Christ, death is like falling asleep. You go to bed and you fall asleep without knowing when. That is how you will die, like falling asleep. That is why the Church calls the dead “those who have fallen asleep in the Lord.” You die as if you are falling asleep and you awake in the resurrection. In an instant you pass from this world to glory, whether or not millions of years have gone by. [p. 277]

Do you see any mention anything about a particular or individual judgment?  Does his narrative of death even allow for it?  No?  Are you surprised?

In the fourth volume of his Catechetical Directory, in a catechesis associated with the Neocatechumenal Way’s Second Baptismal Scrutiny, Kiko is even more clear in presenting his idea that Christians are not subject to judgment after death:

“St. Paul says that Jesus will return to judge all things. For the church, for this bride, this judgment was already made in advance for us.” p. 54.

What is curious about this is that the Neocatechumenal Way’s Second Baptismal convivence is all about judging!  Each participant is set in front of the community and all of his or her faults are recounted.  Perhaps for Kiko, this substitutes for the Last Judgment?

What Does the Church Actually Teach?

While it is true that that the Church vigorously proclaims that Jesus offered us His forgiveness on the Cross and that we must accept His forgiveness by repenting, with respect to “judgment”, the Church teaches something quite different.  In using the word “judgment”, Kiko deliberately misappropriates the traditional language of the Church, which has historically taught that there are indeed two judgments facing men:  the Particular Judgment that occurs for each person immediately upon death, and the General (or Last or Final) Judgment, that happens at the end of the world when Christ returns again and each man, whether wicked or just, receives a resurrected body.

From the Catechism of the Catholic Church:

Each man receives his eternal retribution in his immortal soul at the very moment of his death, in a particular judgment that refers his life to Christ: either entrance into the blessedness of heaven-through a purification or immediately,– or immediate and everlasting damnation.  [CCC 1022]

The resurrection of all the dead, “of both the just and the unjust,” will precede the Last Judgment…Then Christ will come “in his glory, and all the angels with him. . . . Before him will be gathered all the nations, and he will separate them one from another as a shepherd separates the sheep from the goats, and he will place the sheep at his right hand, but the goats at the left. . . . And they will go away into eternal punishment, but the righteous into eternal life.” [CCC 1038]

“In the presence of Christ, who is Truth itself, the truth of each man’s relationship with God will be laid bare.  The Last Judgment will reveal even to its furthest consequences the good each person has done or failed to do during his earthly life..” [CCC 1039]

Our Involvement in the Final Judgment

While many Catholics are not aware of this, the Church clearly teaches that the Just will have a cooperative role in the final judgment.  Of course, Kiko does not fail to point this out.  From a catechesis associated with the second day of the initial catechesis in the first volume of the Catechetical Directory:

Kiko is slightly off in his interpretation of Matthew 19:28, for that verse actually reads:

“Jesus said to them, “Truly, I say to you, in the new world, when the Son of man shall sit on his glorious throne, you who have followed me will also sit on twelve thrones, judging the twelve tribes of Israel.”

In some mysterious way, the just will help Christ judge at the Last Judgment, but the “thrones” are reserved for the 12 apostles, not for all Christians as Kiko asserts.  Nonetheless, St. Paul does tell us:

Do you not know that the saints will judge the world? And if the world is to be judged by you, are you incompetent to try trivial cases?” [1 Cor. 6:2]

Can Christian Both Cooperate in and be Subject to the Last Judgment?

So then, even if Christians cooperate in the Last Judgment, how do we know that they (we) are also subject to that same judgment?

Because the Sacred Scriptures tell us so.  St. Paul states clearly in his second letter to the Corinthians:

“For we must all appear before the judgment seat of Christ, so that each one may receive good or evil, according to what he has done in the body.” [2 Cor. 5:10]

And St. John tells us in in the Book of Revelation:

“Then I saw a great white throne and him who sat upon it; from his presence earth and sky fled away, and no place was found for them.  And I saw the dead, great and small, standing before the throne, and books were opened. Also another book was opened, which is the book of life. And the dead were judged by what was written in the books, by what they had done.”  [Rev. 20:11-12]

And why is this?  Why should all men, Christian or not, be subject to a final judgment at the end of the world and upon being resurrected?

The Roman Catechism, a fruit of the Council of Trent, gives three reasons that explain this rather well:

2)  The General (Last) Judgment occurs after the resurrection of the body because the body should share in the awards and punishments with the soul.  That is because our deeds, both good and evil, were done in the body.

3)  The General Judgement will be public so that truth and justice will finally be victorious.  The misunderstandings we harbor, caused by seeing the apparent flourishing of the wicked and by witnessing the affliction suffered by the good on earth, will be corrected and praise given to God, who will finally be seen to have ordered all things in His wisdom.

Back to the Riddle of Kiko’s Fresco

Well, what do you think?  Did you find any differences between the original work and Kiko’s copy?

Looking closely, one can see that Kiko removed a “layer” of people from his version! Specifically, he removed the line of righteous waiting to be judged!

First, look at the two pictures side by side:

Now, look at a closeup, and you’ll see what I mean: 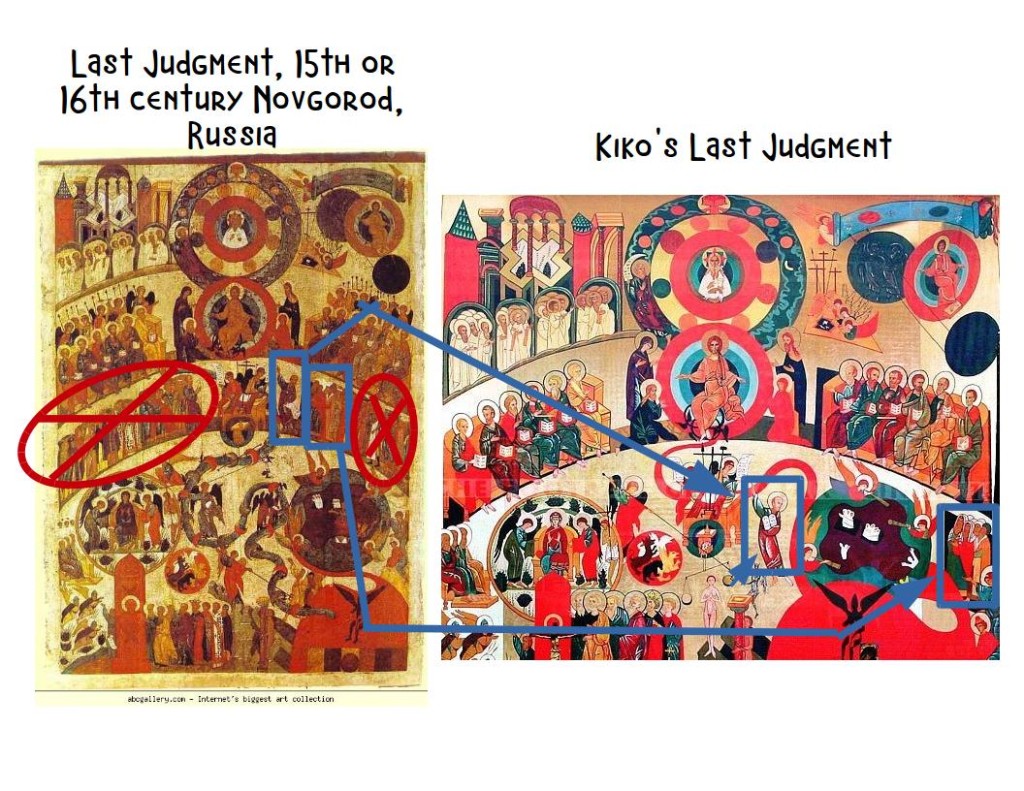 Both pictures have the apostles sitting to the right and left of Jesus, helping him to judge.  The traditional icon has those waiting for their judgment, including the righteous, below them.  The righteous are on the right of Jesus (our left).  We can clearly see that the are not present in Kiko’s fresco.  A small subset of the wicked, to the left of Jesus in the traditional icon, remain.

Click the links below to learn more about the original icon.

Catechism of the Catholic Church