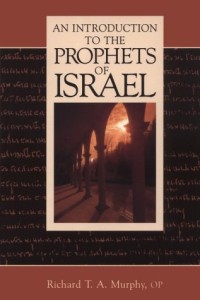 It’s with these words of St. Augustine that Fr. Richard Murphy O.P. starts this highly readable introduction to the prophets, and they guide his presentation throughout the book.

Fr. Murphy starts with an overview of the life and times of the prophets and their teaching.  After describing the major prophets and the minor prophets, he sorts them chronologically into a timeline, and launches into summaries of the works of all seventeen of them. We learn, in the process, how the prophets influenced each other and how their messages emphasized one or more of three basic themes:

These summaries are followed by a list of 30 of the most prominent Messianic prophesies, starting with the “protoevangelium” of Genesis  3:15.  Many of these prophesies, if not all, may be found in the Liturgy of the Catholic Church.

“An Introduction to the Prophets of Israel” whetted my appetite for words of the biblical prophets and serves as an easy, Christ-centered introduction to them.  I was able to read it in a few short hours and now refer to it as I read each of the books of the major and minor prophets.