On November 12, 2014, the European Space Agency’s Rosetta probe will attempt to put it’s lander, called “Philae” onto the surface of comet  67P/Churyumov-Gerasimenko.  While mankind has put exploring craft on Mars and the moon, and sent craft to several other planets, it has never before landed on a comet.

Here’s a picture of the comet 67P, which the Rosetta probe has been orbiting for a few months now.   A “zoomed-in” picture of the landing site is on the right.

It is thought that comets have delivered a significant amount of water and organic molecules to the earth over billions of years, and it is hoped that this mission will greatly further our knowledge of the composition and origin of comets.

Here’s a short 3 minute video from the European Space Agency that describes the mission and shows a simulation of the upcoming landing:

Here are more photos of the comet and the probe: 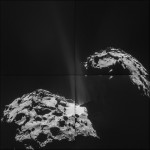 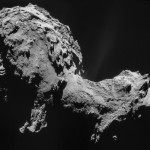 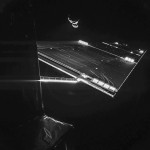 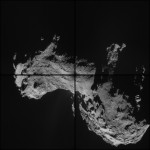 One thought on “Reaching out to a…comet!”